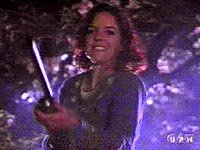 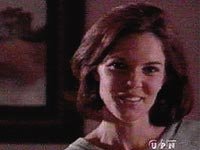 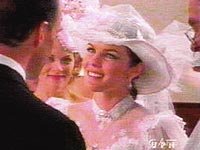 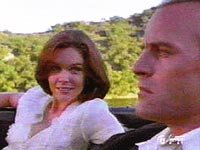 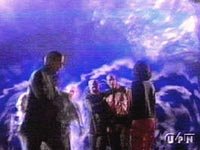 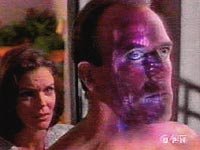 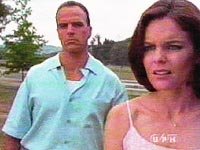 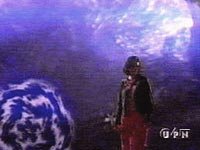 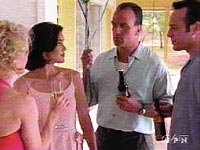 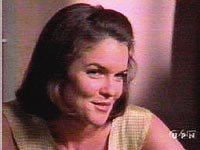 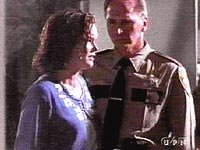 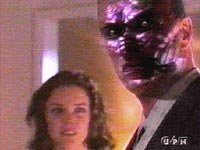 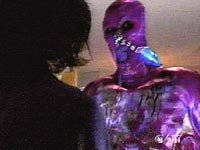 I MARRIED A MONSTER is a late 90's remake of a late 50's sci-fihorror goof-ball called I MARRIED A MONSTER FROM OUTER SPACE (granted, that's a slightly better sounding title than TEENAGERS FROM OUTER SPACE). They could have easily named it "I Married Computer Generated Colors From Outer Space", as that's basically what the aliens (and their ship too, for that matter) look like. The aliens and their spacecraft look like a bunch of liquefied, fluorescent colors (mainly purple, green and blue) thrown in a mixer. Their colorful appearance usually manifests itself in the form of a skeleton-like structure, which could pass off as an alien, I suppose. Now, I could argue that back in '98 the CGI technology wasn't as advanced as it is nowadays. But who am I kidding? STAR WARS: THE PHANTOM MENACE came out in '99 already. That's CGI galore and as colorful as a little kid's sketchbook. But at least it looks neat. Sure, I'm comparing a big budget George Lucas SFX fest to an unknown made-for-TV movie. Unfair, I agree. But still, most of the time the CGI used in I MARRIED A MONSTER is so laughable, that I suspect they did it on purpose. Either that, or they weren't even trying. They make the technology look like if it had been just invented the day before.

Okay, enough about the SFX. They're colorful and funny to look at. What about the movie? Well, if I had to take a wild guess, I'd say this film probably isn't any better or worse than the original from '58. From what I've read, both films basically tell the exact same story in pretty much the same fashion. So why the different ratings then? Oh, yes, I know, it's "Classic Black & White Sci-Fi vs. Crappy Color CGI Re-Make". I'd love to see the original, to be able to compare. As far as this re-make goes, it's not good and it's not bad. It's just right there at that spot in between. Come to think of it, it's right there with practically all the other 90's sci-fihorror made-for-TV efforts I've seen so far.

Most of these films, by the way, learn us that if ever aliens should decide to invade the earth, they will choose a nice little picture-perfect small town nobody has ever heard of. Makes you feel safe living in a city, doesn't it? If you've seen one too many of those films, you just know how I MARRIED A MONSTER will play out. It's basically the umpteenth take on INVASION OF THE BODYSNATCHERS or INVADERS FROM MARS, only with a slightly different agenda for our alien friends. Somehow, I don't quite know what to make of this film. Sure it's sci-fi, I got that part alright. But as horror, there's no tension, there's no atmosphere, it's not frightening and it's not creepy. It might be a bit of a comedy, maybe, but it's just not funny enough. It could be a spoof, but it's not farcical enough. The acting was certainly fair enough, and none of the cast actually seemed to be playing it as a comedy. Which makes it even more strange.

At best, there are a couple of funny touches (mowing miniature crop circles with a lawnmower) and mildly amusing scenes (the aliens not being able to hold their alcoholic beverages). The ending (final scene after the aliens have been defeated) simply can't be more typical. I usually like seeing these type of endings, over and over again, all possible variations on it. But here it's just too ridiculous: They actually forgot their baby was conceived by an alien? Very funny actually, when you consider they played it out as a shock ending. Oh well, my general rule is: "Be mild for made-for-TV productions". So there you have it.

Review by (Vomitron_G) from the Doomed Megalopolis of Blasphemous Technoids from the Internet Movie Database.