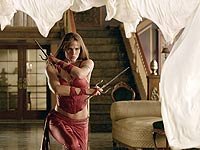 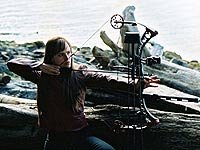 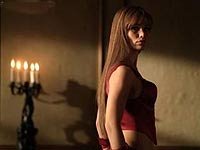 Elektra (Jennifer Garner), a "superhero hitperson" when the film begins, is sent on a routine mission where she has to arrive a couple days early. Since the mission is in a relatively remote, pastoral island location, and she is renting a huge house by herself, she has time--too much time, she begins to feel--to reflect on her life. Contrary to her norm, she even becomes slightly friendly with neighbors. Shortly after, she is given the final, surprising, instructions for her hit, but she has second thoughts, choosing to protect her target instead. The plot concerns background of the hit, how and why Elektra protects the target, and becomes gradually more complex as other parties are revealed to be involved, too.

My final score for Elektra was a 10 out of 10, but it wasn't easy getting there. Unlike most comic book movies, this is a "difficult film". The plot is complexly constructed, with nothing being spelled out very clearly until the viewer is far into the film. It also has a subtext hinging on moral ambiguity, making the film very gray, both literally and figuratively. Because things aren't explained well in the beginning, shortly into the film I had a sinking feeling that it might end up being a disaster. However, by the time you cross the finish line, the complex structure and context of the film are not only comprehensible, but also dazzling and necessary.

As the narration in the beginning of the film states, this is a story set in a world where there are constant battles between good and evil, on many different levels, from large-scale wars to personal struggles within a single individual. This theme is woven throughout much of the film, leading to the moral ambiguity mentioned above, and even dictating the production design and cinematography. At the beginning of the film, Elektra is a hired assassin who makes no distinction between good and evil. Only later do we learn how she got to that point, and one of the overarching themes of the film is Elektra's redemption, which was put into motion with the aid of others, over many years, in ways that she (as well as the audience) does not realize until the end of the film. Although it would be easier for the audience to understand the film if Elektra's background were made explicit from the start, it wouldn't have the same eventual impact. In fact, it would tend to make the film more maudlin than what it is--a thought provoking moral exploration.

The plot can also be seen as a metaphor for childhood dreams and parental investment and sacrifice for children, which are often shattered once innocence is lost and one has to deal with a pragmatic deflation of ambition and the often-brutal realities of the adult world. On this interpretation, it may be no coincidence that the "bad guys" are those who are still living in a magical reality, whereas the "good guys" are those who achieve spectacular results through years of learning and honing more down-to-earth skills.

On a more superficial level, Elektra is a relatively fast-paced, fantasy-oriented actionerthriller, loaded with suspense at the right moments, good performances, great direction, intriguing special effects and exciting fight scenes. I was particularly fascinated with the "bad guys" and their abilities, and also with Elektra's mentor. I'd love to see all of them explored more in other films (perhaps in a prequel of two to the events depicted here). I also hope we'll get sequels dealing more with Elektra and Abby Miller (Kirsten Prout).

As a 10, of course Elektra is worth watching, but it's important to not be impatient with the film while watching it. It seems messy and maybe even slightly vacuous for the first 20 minutes or so, but that's because of a necessary angle of approach for accomplishing something unusual and valuable that couldn't otherwise be achieved.