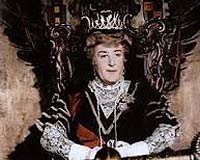 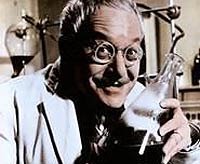 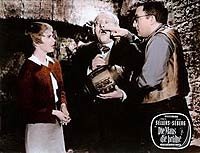 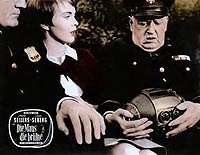 Director Jack Arnold, known best for his 1950s sci-fi epics such as "The Incredible Shrinking Man," "It Came From Outer Space" and "The Creature from the Black Lagoon," proved that he could helm hilarious comedies with his cinematic adaptation of Irish-American author Leonard Wibberley's satiric novel "The Mouse That Roared." Wibberley wrote the novel in 1955 and initially serialized it in "The Saturday Evening Post" magazine under the title "The Day New York City Was Invaded." "The Mouse That Roared" represented the first time that Sellers received top billing in three roles in the same film. Arnold employed no photographic tricks to place the three characters in the same shot. In later years, Sellers disowned the film, thought very little of it and never understood why it earned $2-million during its initial theatrical showings. American and British audiences enjoyed the joke that an imaginary European country with nothing more than a squad of archers could bring a superpower like the United States to its knees. Producer Walter Shenson produced "Mouse" for about $450-thousand. Sellers turned down the sequel "The Mouse on the Moon" and nobody played all three same roles in it.

A California winery has marketed a 'knock-off' version of Pinot Grand Fenwick and the microscopic European country of Grand Fenwick finds itself on the verge of bankruptcy. The United States does not respond to any of the protests that Grand Fenwick sent. Consequently, the Prime Minister of Grand Fenwick, Count Mountjoy (Peter Sellers) suggests that they declare war on America. Everybody argues that Grand Fenwick would lose the war. "You must remember, the Americans are a rather strange people," Mountjoy defends his strategy. "There isn't a more profitable undertaking for any country than to declare war on the United States and be defeated." Mountjoy adds, "Whereas other countries rarely forgive anything, the Americans forgive everything. No sooner is the aggressor defeated than the Americans pour in food, machinery, clothes, technical aid and lots of money for the relief of its former enemies." He ends his defense with the following: "In effect, we declare war on Monday, we're defeated on Tuesday, and by Friday, we well be rehabilitated beyond our wildest dreams."

Gloriana the Twelfth (Peter Sellers) worries about putting Tully Bascom (Peter Sellers) in charge of an army of archers. They sent along former British Army sergeant Will Buckley (William Hartnell, later the first "Dr. Who") to help supervise the army. Poor Tully suffers from a host of ailments including seasickness and he is seasick from the moment his army and he leave the Port of Marseilles and head for New York Harbor. Along the way, our heroes pass the luxury liner the Queen Mary and fire arrows at it when they warn them that New York Harbor has been shut down as part of a drill. Our heroes arrive in Manhattan and find it totally deserted. Tully reads in a newspaper that Columbia Professor Alfred Kokintz (David Kossoff of "Indiscreet") is building a Q-bomb. The Q-Bomb makes the H-Bomb look like a picnic.

Tully surprises Mountjoy, Gloriana the Twelfth, and the government when he returns from New York with the Q-Bomb, Professor Kokintz with his daughter Helen (Jean Seberg of "Saint Joan"), General Snippet (MacDonald Parke of "John Paul Jones"), and three New York City cops. Suddenly, Grand Fenwick officials are aghast of Tully's achievement. They wanted him to lose the war. On the contrary, he has won the war! The officials are apoplectic until Tully explains that they have the most destructive bomb ever made. The other superpowers offer to defend Grand Fenwick against America, but Secretary of State Defense (Austin Willis of "Hour of the Gun") counsels his government to capitulate.

Scenarists Roger MacDougall and Stanley Mann altered several things. The film "The Mouse That Roared" (1958) differs in at least seven ways from the Christopher Sergel two-act play. First, the Duchess Gloriana the Twelfth of novel and play is a 22-year old girl. In the film, Peter Sellers plays the sovereign of Grand Fenwick as a full-figured widow in her twilight years. Furthermore, Sellers plays bespectacled forest ranger Tully Bascom as well as the aristocratic Prime Minister Count Mountjoy. Second, the U.S. President plays a prominent role in Sergel play, but he is only heard about in Arnold's film. In Sergel's play, the President is in the room with Professor Kokintz when the inventor describes the destructive power of his Q-Bomb. Third, General Snippet in on hand, too, but he has two daughters who are WACs. In the film, Snippet had no daughters. Fourth, in the movie, Southern Europe Protocol Clerk Chester X. Beston received the Grand Fenwick Declaration of War, ignored it, and got shipped off to an obscure posting because he thought the boys in the Press had played a trick on him. In the play, Beston is the Secretary of State. Fifth, in the play, Tully and company kidnap Professor Kokintz during a protest rally at Columbia University on the suggestion of a rioting student. However, in Arnold's film, the Grand Fenwick Army enters New York during an air raid drill when the streets are empty and everybody is in an air-raid tunnel. Tully and his men march unmolested to Kokintz's laboratory, take the professor, his daughter Helen, General Snippet and the Q-bomb into custody. Sixth, in the film, Tully becomes romantically attached to Kokintz's daughter Helen. Tully has no love interest in the play. Seventh, in the film, Tully's men also take some New York City policemen as hostage, but they only take Snippet, his WAC daughters, and Kokintz.

"The Mouse That Roared" qualifies as a hilarious comedy that shows how a superpower is held hostage by a tiny country. Actually, in a less complimentary light, the quandary that the United States found itself in with Grand Fenwick is comparable to the debacle of the Vietnam War.

Review by zardoz-13 from the Internet Movie Database.