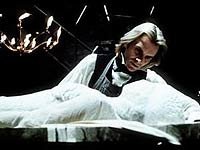 If you think the ending of "Bride of Frankenstein" (1935) was too succinct, had too much action, quality acting and James Whale's characteristic combination of horror, camp and originality than you're in luck because "The Bride" does away with all of that--providing nearly two hours of tedium, simplism, lousy acting and a new ending that's so unoriginal that, at least as far back as the beginning of the 20th Century, silent-film director D.W. Griffith employed it for dozens of films.

"The Bride" begins where "Bride of Frankenstein" ended, with the creation of the mate for Frankenstein's monster. The scene is generally based on those of the 1930s Universal films, with a laboratory in a tower full of bubbling beakers, spinning gizmos, flashing doodads, archaic levers and pulleys and the lightning. There's also an electric globe that looks like one of those Van de Graaff generators you see in science museums for children. Dr. Frankenstein has his assistants, too, one of which may be the usual hunchback, except the hunched back isn't prominently displayed if it's there, and another who is a white-haired fellow doctor with a passing resemblance to Dr. Pretorius from the 1935 film without an ounce of the charm. There's the typical violent conclusion, and the monster runs away, his path diverging for most of the film from those of Dr. Frankenstein and the bride. But, of course, we know their paths will converge again by the end, because that's how these movies work and because the monster and his bride inexplicably have a psychic connection. It must be love... or lightning. Ooh, tagline idea: Born of lightning (and mutilated corpses). Their love was electric.

Jennifer Beals as the bride, christened here as "Eva" after Genesis, heads the cast with her Razzie-nominated performance, her snarling and initially painfully-slow delivery grabbing its due attention, but the musician Sting is equal to the part of Frankenstein, as well. Content to speak softly about the "new woman" and do next to nothing for most of the film, he occasionally has bursts of chauvinistic and jealous yelling and violence. Frankenstein's original creature, christened here "Viktor," the name of Mary Shelley's Frankenstein, and his midget friend, unfortunately for those interested in rubbish, are more interesting to follow, as they have a journey plot that takes them to Budapest and employment with a circus. Viktor also finds himself chased by a mob, a hallmark of the Universal monster movies, and he has an encounter with a blind man much different than the ones he had in either the 1935 film or Mary Shelley's novel.

I'm afraid there are two other bits about "The Bride" that I liked, but I promise they're brief. One is the reference to Percy Shelley's book "Prometheus Unbound," "Prometheus" also being part of the subtitle of his wife, Mary Shelley's novel "Frankenstein; or, The Modern Prometheus." The other bit is the secret passageway behind a mirror that reveals the truth of her origins to Eva. I like a good mirror shot, and it stands out in a film otherwise framed barely better than a TV movie with some cinematic low-key lighting.

I've been reviewing a bunch of Frankenstein movies since reading the novel, which is something I also recently did with "Dracula." More so than Dracula, most Frankenstein films manage to avoid reducing the Gothic horror story to a romance, but not here. Although Frankenstein may've lasted more than a decade longer than Dracula without it, where films such as "Blacula" (1972) and Dan Curtis's TV-movie "Bram Stoker's Dracula" (1974) introduced the reincarnation romance, ripped off most famously by Francis Ford Coppola's 1992 "Bram Stoker's Dracula."

Oh, and the ending of "The Bride" takes a page from D.W. Griffith's playbook by resorting to a damsel-in-distress scenario, with Eva in the part frequently played by Lillian Gish where she runs away from her would-be rapist, only to be saved in a last-minute rescue by the hero. A perfect ending for anyone comforted by the hackneyed, and if one thought that Boris Karloff's speech about life and death to conclude the 1935 film was too pithy and poignant, lacking the copious amounts of sap required for an old-fashioned mawkish finale, fear not. Unless boredom or generally low quality frightens you, there is nothing to fear in "The Bride.".

Review by Cineanalyst from the Internet Movie Database.