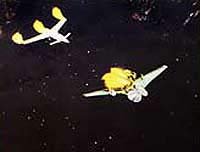 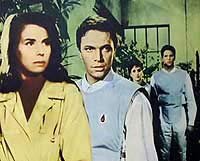 I guess every great actor is allowed at least one poor casting decision, and with this film, that distinction goes to Claude Rains. It's hard to believe the Professor Benson of this film is the same man who brilliantly portrayed Captain Renault in 1942's "Casablanca". Here he's one dimensionally annoying as a bull headed scientist who's undeniably impressed with himself and isn't shy about letting you know it - "There's only one opinion that interests me, and that's my own."

Benson's mathematical calculations convince him that a body in outer space will come within ninety five thousand miles of Earth, even though colleagues and military strategists fret over it's seeming collision course with our planet. What Benson didn't count on, and by his own admission the only time he was ever wrong, is that once the asteroid reaches it's predestined location, it starts orbiting the Earth. With obvious implications that a guiding force is at the core of the mysterious body, Benson demands that Earth's 'High Command' not destroy it, but allow him and a team of his fellow scientists investigate.

I always get a kick out of the way sci-fi flicks of the era took such liberty with the vast amounts of time involved in space travel, and reduced them to mere minutes for purposes of the story. In about the time it took to count down from ten to one, blast off, Benson's team was on the asteroid, investigating a cable laden labyrinth with an ominous red glow. With a destruct sequence in effect, Benson prefers to confront the truth of the mystery of the 'Outsider', while everyone else with him wisely decides that maybe it's time to go. On that note, one of the team members sadly concludes that Benson had a formula where his heart should have been, as the planet goes kablooey.

"Battle of the Worlds" is a gross exaggeration in selection of a title. Nothing on that vast a scale occurs, though there are occasional skirmishes between Earth rockets and alien flying saucers. If there's a positive to be found here, at least the sci-fi elements of the picture were a notch above other films of the era, as film making technology relentlessly moved toward breakthroughs that would appear in "Star Trek" in a few more years.