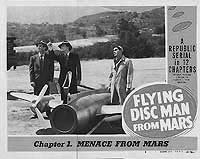 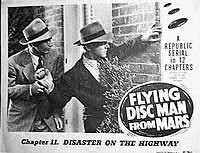 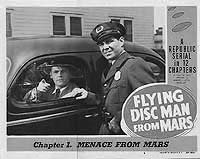 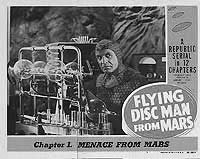 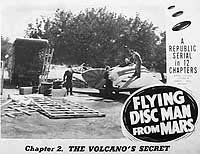 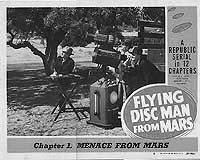 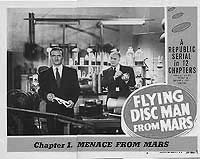 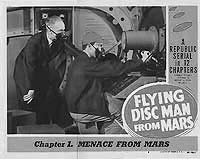 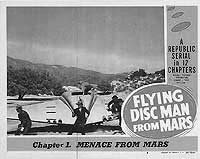 1958 was a year where 'missiles' and 'satellites' were popular at the box office: "The Lost Missile," "Missile to the Moon," "War of the Satellites," "Attack of the 50 Foot Woman" (talking constantly of satellites). The nearly defunct studio Republic issued a double bill comprised of stock footage from two of their science fiction serials from early in the decade- "Missile Monsters" (1950's "Flying Disc Man from Mars") and "Satan's Satellites" (1952's "Zombies of the Stratosphere"). Both were cut down to a serviceable 70 minutes, and it's a tossup as to which is more dull. "Missile Monsters" casts Gregory Gay as the titular 'flying disc man from Mars,' receiving aid from a renegade scientist who also desires to conquer the earth, hiring a pair of 'intelligent criminals(!)' to put together the material they need to build bomber planes of Martian design. Like its companion feature "Satan's Satellites," "Missile Monsters" appeared on Pittsburgh's Chiller Theater, on June 20 1974 (paired with second feature "The Frozen Ghost"), and on July 31 1976 (following first feature "The Mummy," Karloff's 1932 classic).

Review by kevin olzak from the Internet Movie Database.