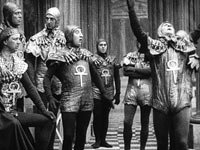 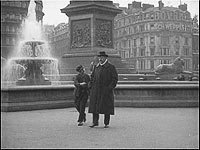 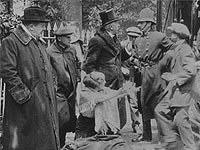 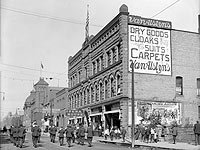 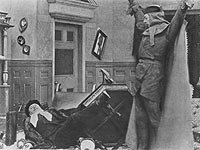 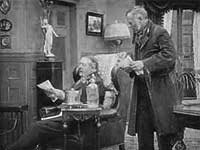 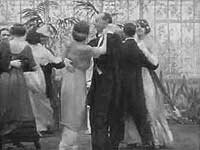 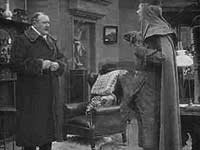 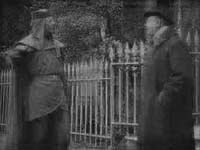 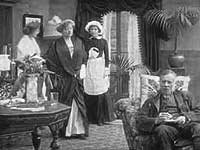 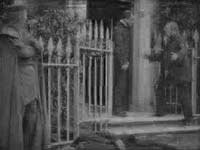 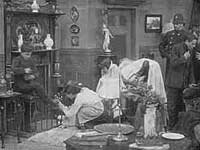 Charles Hawtrey (more about that name later) was an actor-manager in Victorian England, specialising in light comedies. One of his biggest hits was "A Message from Mars" by the American playwright Richard Ganthony. Hawtrey premiered this play at the Avenue Theatre, London, in 1899. The play ran for nearly two years. In 1901, Hawtrey made his triumphant American debut in this same play at the Garrick Theatre, New York City.

Horace Parker (Hawtrey) is a wealthy young man who is exceedingly selfish and self-centred: not only is he a miser, but he also expects his friends (and everyone else) to conduct their lives according to his personal convenience. Parker is engaged to Minnie Templer (played by the attractive ingenue Crissie Bell), but Minnie has discovered Parker's selfishness and she is on the brink of calling off the engagement.

Parker does have one constructive hobby: he is an amateur astronomer, and owns a magnificent telescope. One evening he reads a magazine article which speculates about the possibility of intelligent life on Mars. Parker is sceptical about this, and he drifts off to sleep in his study.

Suddenly, Parker is awakened by a visitor: Ramiel, a messenger from Mars. If you're wondering what a 1913-vintage movie Martian looks like, you'll be disappointed. Ramiel (played by E. Holman Clark) looks like a handsome Englishman in tight-fitting black clothes. He doesn't have a spaceship or any other interplanetary gear; he simply ARRIVES in Parker's study. All through the story, Ramiel acts more like an angel than an alien: he really seems to be a visitor from Heaven (using some sort of magic or divine intervention) rather than a visitor from another planet with access to advanced technology.

Ramiel has come all the way from Mars to teach Parker the error of his ways. Just as the Spirits of Christmas did with Scrooge, Ramiel is able to teleport himself and Parker to different locations, where they observe other people's actions while remaining invisible to everyone but us.

First, Ramiel makes Parker witness the lives of people much less fortunate than himself... including an inventor who was cheated out of the fruits of his labour and now must live as a starving tramp. Parker is unmoved. Next, Ramiel allows Parker to eavesdrop on his friends and to overhear their real opinions of him: most of his "friends" actually despise Parker's selfishness and are only interested in him for his money. Parker is angered but unmoved. Finally, Ramiel manipulates reality so that Parker's fortune is lost and he is a pauper.

SPOILER ALERT: The ending is obvious. Parker was asleep when the Martian arrives, so of course all of this turns out to be (surprise!) a dream. Now he awakens, and (like Scrooge) he has learnt his lesson. Parker vows to end his selfishness, using his fortune to help others. Minnie decides to marry him after all, without bothering to wonder how Parker has changed so drastically overnight.

The script of "A Message from Mars" was published in book form in 1913, illustrated with photo stills from the movie. This may be the very first bookmovie publicity tie-in.

Most film fans will associate the name "Charles Hawtrey" with an English comedian of a later era, who starred in the "Carry On" movies and played supporting roles in several major British films, including "Sabotage" and "Passport to Pimlico". For years, I mistakenly assumed that he was Charles Hawtrey Junior, son of the Victorian stage actor who stars in 'A Message from Mars'. In fact, the 'Carry On' actor's real name was George Hartree. During his adolescence, as a child actor (when the original Charles Hawtrey was still well-remembered), Hartree cynically changed his name to "Charles Hawtrey" with the specific intention of misleading people into believing that he was Hawtrey's son.

"A Message from Mars" is creaky and predictable, and not a science-fiction film as I define the term, but it holds some interest for those interested in the Victorian theatre.