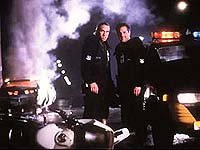 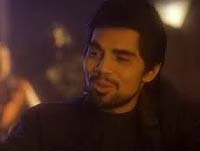 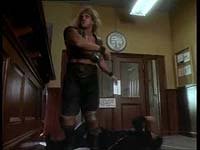 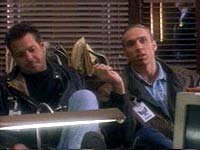 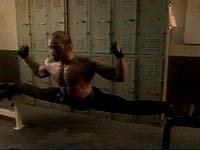 `Yeah, well keep your stick' in the ring. Don't practice on my girls. I need them to concentrate on their jobs, so my business doesn't suffer...'

In the year 2007, crime has risen at an exponential rate. Once highly populated metropolises such as Los Angeles are no longer inhabitable. These cities have transformed into `Hell Zones,' ruled by violent street gangs. Talk about Y2K!

Two brave cops, Braniff (Chad McQueen), and Sledge (Gary Daniels) must risk their badges...and their lives when they enter Los Angeles's `Hell Zone.' Entering the Hell Zone is insanity...escaping from it is impossible. The Hell Zone, formerly called the `Zone of Personal Freedom,' is a safe-haven for criminal warpaths everywhere. This Hell Zone in LA is controlled by a criminal mastermind named Drexal (Joseph Ruskin). For the sake of entertaining his crowds of decadent losers and underlings, Drexal has staged a series of lethal, no-holds-barred matches in the `Death Ring,' where the winner takes all of the glory...while the defeated one shall lose his self-respect (or maybe just his head).

Meanwhile, Braniff and Sledge are obliged to go undercover in a clandestine mission as Death Ring fighters themselves. Sledge is actually having fun roughing up his Death Ring rivals while Braniff finds his martial vows in jeopardy as he himself becomes attracted to a beautiful woman named Lisa (Alisha Das). However, this married cop must remember his priority. Braniff, along with his robust and agile partner, Sledge, must fight for their lives in order to expose an alleged `black market' involving the sale of counterfeit AIDS vaccines. Will these two men triumph against all odds in the Hell Zone alive or will they pay with their very lives?

FIREPOWER is probably one of the most ridiculously contrived thrillers ever. This film is completely inept, with terrible acting and an incoherent plot. The script, full of pathetic one-liners and inane drivel, is also embarrassing enough. Incidentally, to make everything worse than it already is, this film is not quite as exciting as the title promises. For instance, the action scenes lack that poetic style. Sure, we have the heroes and the villains shooting at each other and trying to beat one another, but all of these action scenes lack that flair. There is no sense of excitement involved when viewing these action sequences. Also, the fight scenes lack the brutal realism; instead, they just seem like child's play. The fighters constantly beat, maul, maim, and mutilate each other, yet not a single fighter (save for the ones who are murdered in the Death Ring) seems to be displaying any severe injuries. The one-on-one death matches as well get repetitive. Listless action scenes are just part of this movie's innumerable problems. The dearth of both an intense musical score and smooth camerawork only injures this movie even more substantially...

Although FIREPOWER is an appalling movie, I found one factor which almost redeems this whole unpleasantness: The fact that this movie is amusing, whether it wants to admit it or not. The acting especially is funny. The main adversaries, Drexal and Mendez (Pablo Marz) are more asinine than frightening. You would expect Drexal to be insidious and sinister, but he appears to be more of an ersatz Vincent Price. Lawrence Hilton-Jacobs provides some amusing commentary as a ring announcer. Chad McQueen lacks the appeal and charisma of his father, the late (and terrific) Steve McQueen, but you will chuckle at how he tries to develop his relationship with Lisa. As for Gary Daniels, I must attest that he is one of the most impressive fighters ever. Granted, Daniels does have a thick accent, but after seeing this guy showcase his martial arts skills, you would not even want to comment on his accent! If you do, then prepare to defend yourself! (By the way, his accent does happen to distract from the impact of his one-liners.)

The best acting though, is displayed by Jim Hellwig (known to professional wrestling fans everywhere as the `Ultimate Warrior') as the Swordsman, a barbaric character who yells as if he was raised in the jungles. The Swordsman himself, a formidable opponent, only understands the language of violence. Also, I must comment that a lot of these fighters featured in this movie DO NOT know how to fight! As for the action scenes, it is just awesome how the car crashes and explosions can be seen from different angles in this movie! It is just brilliant! The (mostly unintentional) humor keeps FIREPOWER from becoming too lackluster.

It is a complete shame that FIREPOWER could not be a better movie. The special effects looked silly, but they worked, and the plot too held some potential. The sub-plot in particular, about a counterfeit AIDS vaccine seems very promising. It is quite sad that the filmmakers did not take advantage of that opportunity; it would have given the film more substance. Unfortunately, the anemic direction by Richard Pepin and the mediocre cinematography are unacceptable as well. Anyway, FIREPOWER is not worth the time if you happen to watch it by yourself. Instead, gather a group of friends, sit on a cozy couch, and prepare to have fun. Trust me, your colorful comments for this movie will be uninhibited!

Review by DragonFire99 from the Internet Movie Database.