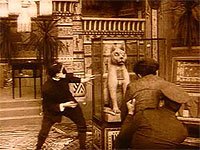 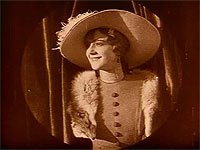 I have been waiting to see this movie for some four years now. That's not much, really, since fans of old movies sometimes have to wait decades, if they are lucky enough to get their wish. However, images of a Beaux Artes poster, showing a woman descending from a dirigible, made this one seem special. Unfortunately, the copies available to me were unwatchable. Finally, a decent print has fallen into my hands. It is a little soft, and there is some damage, but the movie turns out to be a deliriously insane Evil Mastermind melodrama, as mad as Feuillade's LES VAMPIRES.

First off, who or what is Filibus? It turns out to be Valeria Creti, who is also the Baroness Troixmonde and the Count De La Brive. Learning that a banker she has robbed has set detective Giovanni Spano on her trail, she conceives an incoherent plan: she will convince the detective that Filibus is he, using his own, modern scientific methods against him; and she will court his sister, Cristina Ruspoli, as the Count.

Given that Miss Creti is a baroness and wealthy enough have her own dirigible with a loyal crew, her motivation is unclear. If this movie had be produced this year, she would look like a militant Lesbian feminist, or perhaps someone who identifies as a heterosexual cis-male. Yet applying those standards to a work of fiction more than a hundred years old seems wrong. More likely, the impulse was to produce one of the would-be world conquerors like Fu Manchu, Dr. Mabuse, or Pinky and the Brain -- only this time, for variety's sake, let's make the mastermind a woman!

It is the incomplete transformation of the archetype that makes it so bizarrely entertaining. I mentioned Feuillade, whose melodramatic thrillers and serials exhibit the same outre qualities. I am convinced those arise because of the terrific pace at which he worked. Hey! We've got a balloon for two days. How do we write that in? Let's use it to go mail a letter. Hey, we've killed off Musidora in the fifth episode of the serial and we'll need her later! No problem, we'll take another Musidora out of a box. Feuillade would write himself into a corner, snap his fingers and come up with a quick solution, like Bugs Bunny pulling a cannon from offstage. The audience would look puzzled, think "Ah, this will all be explained later!" and forget about it.

Of course, LES VAMPIRES was a serial that, were you to binge-watch it, would take more than seven hours. As for this one, the end credits suggest that there will be more encounters between the mysterious Filibus and the scientific detective. Perhaps the answers to these questions and others will be given in the sequels.

Review by boblipton from the Internet Movie Database.