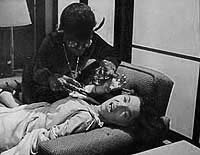 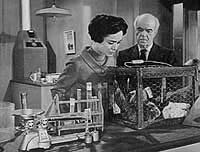 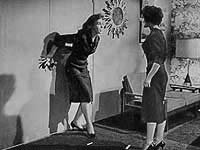 It frustrates me when people refer to The Wasp Woman as a good B-movie or, even more condescendingly, as a good Roger Corman movie. The Wasp Woman is simply an excellent film - no caveat required. This film is well acted, logical within its premise and most impressively, still disturbing. The special effects may have dated but the psychological horror which underpins the action remains as brutal as ever.

The beauty of The Wasp Woman is its simplicity. Dr Zinthrop discovers an anti-ageing antidote in wasp jelly and brings it to the attention of Janice, the owner of a cosmetics company. Janice, faced with the prospect of falling sales and her own fading beauty, agrees to fund the scientist's work on the condition that Dr Zinthrop use her as a guinea pig. Unfortunately, this has the unwanted side effect of turning her into a homicidal waspwoman hybrid. As with all good genre films, The Wasp Woman defines its premise early and the narrative never strays from these clearly defined plot constraints. The developments in the film might be outrageous but taken within their context, they make perfect sense.

The Wasp Woman is without a doubt one of Roger Corman's best films. I am a big fan of the wonderful crap that he has produced since retiring as a director but this film is a poignant reminder of what Roger Corman is capable of when he takes his subject matter seriously. The Wasp Woman also underlines Corman's considerable skill as a director. The film is taut, cohesive and brilliantly paced. From the moment the film begins, there is a sense of tension and desperation about these characters that is almost palpable. This is due to both the excellent script and some impressive acting.

Susan Cabot has never struck me as the most gifted actress but her turn as Janice is extraordinary. Janice could have easily come across as a vain, ruthless woman. However, Susan's performance is so well calibrated that it is hard not to feel sympathetic to her plight. The scene where Janice realises that the company is failing due to her no longer being a "glamour girl" is devastating. The supporting cast is equally good. Michael Mark is particularly impressive as Dr Zinthrop. Dr Zinthrop's dedication to his research is creepy from the very outset. Anthony Eisley and Barboura Morris are solid as Lane and Mary, the voices of reason in the face of Janice's increasingly demented mindset.

The Wasp Woman would basically be nothing more than a well executed museum piece if it no longer had the capacity to be taken seriously as a thriller. The first glance of Janice, elegantly dressed and wearing a wasp mask, is jolting. My first reaction was to laugh but that quickly subsided. There is something psychologically unsettling about Janice's fate. Here is a woman used to being in charge, slowly but surely being taken over by something evil that is well and truly out of her control. The campy wasp effects are all the most disturbing because Janice is still so recognisable. Furthermore, there is something plain creepy about a killer wearing pearls and a twin set - even if the killer is half wasp.

The Wasp Woman steadily builds momentum until the impressive and satisfying conclusion. The film is psychologically violent and brutal, yet beautiful in a way that only these low budget black and white movies can be. The Wasp Woman is a fine achievement. Modern horror directors could learn a thing or two by watching this.

Review by Crap_Connoisseur from the Internet Movie Database.