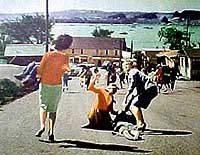 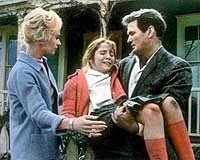 Of course Alfred Hitchcock's The Birds is a classic and a great movie for many reasons. The camera angles, panning and tracking, the suspenseful plot, the emotion in the story-line and actors, and of course the great actors and actresses Hitchcock used.

But there always seems to be a very interesting underlying "symbolic message in the bottle" in Hitchcock's plot and sometimes it is not easy to decipher. Of all the reviews here about The Birds, the underlying message has escaped the other writers. Not sure why. Might be that people don't read many actual paper books anymore and spend long hours online where everything is "told to them". Maybe its because films are not really studied or analyzed anymore as much as they are consumed in a "entertain me now" kind of way.

Anyway...the name of the movie itself should be a great hint of the underlying symbolic ideas. "The Birds" and thus the birds and the bees. The Birds and the Bees refer to the old ideology of the natural order of things which were changing at the time this movie was made. This idea of natural order encompassed the idea that only "men and women" were allowed to be in love, married and making love and that only men were supposed to be the pursuer in this natural order of human love.

Hitchcock's plot opens in San Francisco, which at the time was just becoming known as a gay friendly city and was opening the doors for the gay liberation movement. This gay embrace was very shocking to conservative USA. This shock value was not lost on Hitchcock. Northern California was also the first to embrace women's equality and liberation. The first major impact of women's liberation was the sometimes reversal of pursuer roles and women becoming assertive in their pursuit of men if they so choose. Hitchcock utilized both of these ground breaking social changes in this movie, filmed in and near San Francisco, the center of both the gay liberation movement and the women's liberation movement.

There were actually two symbolic messages that were carried together to Bodega Bay and none were in a bottle. One was in a cage and draws great symbolism captured in other famous stories such a La Cage aux Folles and the other broke the cage of women's conservative norms which eventually sweep the US and allowed women to finally spread their wings and fly. The first message was the love birds bringing their unnatural love to the quiet little village of Bodega Bay. Even to expert ornithologist, determining the love bird's sex is very difficult. So it could often happen that two love birds paired and affectionate could both be male or both female living life together monogamously. Here I believe that Hitchcock insinuated the Love Birds were of the same sex. This little message carried the notion of two gay partners coming into a small town and disrupting the existing conservative values.

As the love birds were brought into Bodega Bay, their arrival rocked the natural order of things and the existing birds of the community rebelled, first attacking Melanie Daniels who brought them there in an open boat coming slowing across the central bay for all the local birds to see. They then eventually attacked the home which they resided and humans who were harboring them. This story could be easily paralleled with the La Cage story, abet much more suspenseful and horrific, of a gay couple coming into a small town and moving into a home and having the conservative townsfolk rebel. And rebel they did in the most horrific way imaginable. This rebellion was where Hitchcock came into his element and utilized his famous horror and suspense.

And just as the love birds came into Bodega Bay and changed the natural order of things, so did their carrier in Melanie Daniels. Melanie broke all the normal rules and customs of the East Coast conservative malefemale dynamic when she immediately began to seek, prey and chase her suitor Mitch Brenner. Racing her high performance sports car around the narrow curves of the Pacific Coast Highway, renting and manning a boat by herself to find his home, entering his property without permission or invitation, leaving a love letter on his desk and spying her prey from the bay on her skiff. All of these actions in the course of a few minutes broke the natural order of Victorian women's protocol wide open forever. She was a hungry tiger and very much upset the natural order of things which was most evident in Mitch's mother and the layers of emotional depth that involve a man and his conservative mother as the natural order is challenged or broken.

Once the attacks began Melanie quickly took back her already antiquated role as a damsel in distress, which Hitchcock may have needed to enhance his dramatic suspense. But even in her damsel role, Hitchcock allowed Melanie much bravery and an equal level of courage to her co-star Mitch Brenner in the face of a brutal bird rebellion. Here Mitch's mother began to over come the shock of Melanie's aggressiveness and see the brave woman in a more human and accepting way. I think suspense and dramatic distress can be a wonderful instrument in which to allow the viewing of a character in a new and sympathetic light. Hitchcock clearly wanted to show the disruption in our presupposed notion of the natural order of the birds and the bees and also to show the effect of this disruption upon conservative small town societal values again a la Cage aux Folles.

Review by rudyallan from the Internet Movie Database.