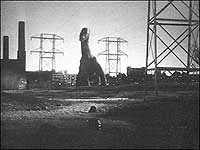 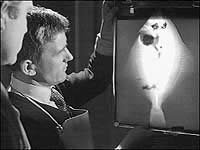 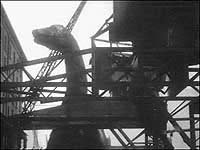 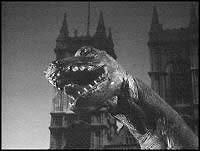 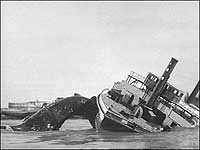 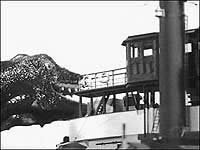 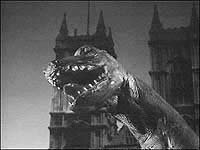 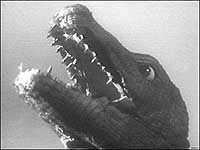 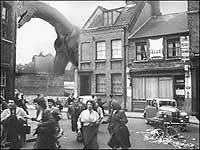 Right now, does anyone (anyone British) remember those old British TV ads for Chewits? The old 80's ones with the cheesy stop-motion Godzilla-esque dinosaur that goes around London (and the world) eating famous landmarks. If I recall the ads were even set in the WWII era, I think, anyway, I do firmly believe those ads were inspired by, and homaged, this classic transatlantic monster movie. This film itself was an obvious rip-off of the classic Ray Harryhausen monster flick 'The Beast from 20,000 Fathoms', which I think is clear to see, riding those coattails.

The plot was originally suppose to be about a strange radioactive blob that attacked the UK (yet another rip-off of another famous monster movie), but they changed it to jump on the giant lizard bandwagon. So as you now know this movie is about a giant Godzilla- esque dinosaurlizard coming ashore and running amok through London. Once again its the old nuclear testing outcome that has caused this huge freak show but I'm not overly sure how or where this behemoth is suppose to have come from. Is it a mutation due to the radiation? if so what kind of marine creature was it originally? A lost species affected by the radiation that comes ashore to die? was it trapped somewhere and was released by the testing? We never really find out fully, but I think it leans more towards a mutated marine mammal, God knows what marine mammal. Anyway this massive monster surfaces in London and begins to terrify the locals by stomping on various buildings and vehicles.

In another idea rip-off slightly reminiscent of the Japanese kaiju movie, this behemoth is also able to emit electrical pulses from its body...which is saturated in radiation. These pulses cause heavy burns to humans which lead to death, yet at the same time this heavy radiation is also killing the dinosaur very slowly. Not entirely a Godzilla clone but certainly along similar lines methinks, overall this movie definitely has taken a few liberties with various ideas from other flicks. On the other hand did this movie influence the 1998 'Godzilla' movie? In that movie an old Japanese man blurts out 'Godzilla!' when seeing the beast near the start. Well in this 1959 movie the exact same thing happens with the first victim, his last words being 'Behemoth!' before dying, interesting.

Effects wise this movie clearly had a small budget, its not terrible, but its pretty shaky. The behemoth waddles around London awkwardly interacting with the small models as it squashes cars and knocks over tall structures. The models unfortunately look like models and the cars look like they are made out of soft clay or whatever, although the black and white film does help protect most of the obvious flaws. The actual behemoth creature doesn't look too bad but considering this film was made in 59, its quite poor compared to earlier giant bugcreature movies. The fixed facial expression with unblinking eyes is never a good thing. The worst thing has to be the rear projection monster footage against the live action actors in the foreground, this looks really bad and decidedly dodgy in all honesty. Other effects such as the electrical pulses are simply a white glaring light and burn makeup on the actors is pretty hokey.

Other live action sequences of masses of cockney folk all running for their lives through the grimy streets of London, are also terribly hokey and crappy looking. Obviously these are all extras, probably not getting paid much, probably not being directed too well and obviously have little to no experience in acting. This leads to some hilariously bad sequences of regular people pretending to be scared of nothing and running away from nothing (the monster would be added later as a rear projection effect). Although, again, it is interesting to see the old footage of London back in the late 50's.

Oddly enough, the effects and film on the whole does get a lot better, and more engaging, when the goodies try to stop the behemoth in their sub. They want to overload the monsters radiation levels by shooting it with a radium filled torpedo. Surprisingly the simple notion of just blowing the creature up is actually discussed and rejected in the movie because of the fact it would release radiation all over the capital. I like this because you'd half expect a movie like this to do just that without thinking of the consequences, but cleverly they do think about consequences and don't go all gung-ho. This leads to a relatively solid submarine sequence which looks good and is reasonably tense, quite the opposite to everything else in the movie.

Everything ends as you would expect of course, the behemoth destroyed, London in ruins with various people being eaten, crushed or burnt alive, and the main goodie characters being just fine and dandy. The military were used but end up being pretty useless as they always seem to be, and incredibly this movie didn't actually have any attractive main male or female characters! Nope instead its all ugly, balding middle aged men and old, grey haired blokes, at least a small degree of originality then. Final kudos must go to the quirky final scene which offers a cute little twist and further possible monster tracking adventures.