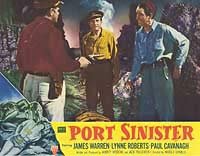 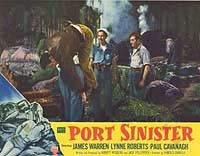 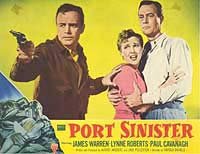 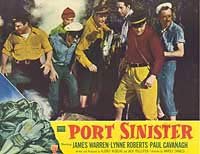 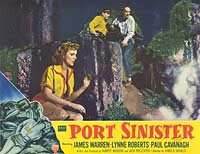 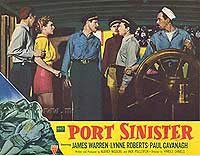 "Beast of Paradise Isle", is a neat, modest little B-picture from the early 1950's. As another viewer for the title had observed, the film feels like a cliff-hanger serial from the 1930's and 1940's, condensed down to a running time of barely an hour.

The basic plot is one concerning the main character proposing an expedition to retrieve lost treasure on a sunken island that turns out to be Port Royal. His theory is that the island will rise up from the oceanic depths for the adventurers to plunder. However, the film's villain learns of these plans and hijacks the expedition, pistol-whipping the hero unconscious and seizing the ship they had hired with his gang of cut-throats. It's a race against time for the hero, as he hires a charter plane to take him to the now-risen island to save the female passenger who was aboard the ship.

All in all, it is a fun title, albeit one that is extremely rare and if found, usually of poor quality. (One hopes that possibly Warner Archive could retrieve a better-looking copy of this title). It was an honor to meet one of the stars of the film, William Schallert (best known for his role on "The Patty Duke Show") and tell him what a fan I was of his work and this film in particular. Though many review books either dismiss the title outright as "forgettable" or having not much to offer, the film has a fun atmosphere, a fast-moving plot, reminiscent of the "Uncharted" video games and "Indiana Jones" films, cheesy dialogue and a giant crab monster(seen only briefly in the film itself, despite being heavily touted in its lobby cards and posters). The film also has a great sequence of the island itself rising from the depths of the ocean, as the members of the expedition watch in amazement. (This being an Rko film, one wonders if the scene was possibly lifted from the "Creation" test footage, a production that would eventually evolve into the studio's biggest money-maker, "King Kong").

In short, if one is not expecting too much from this title (written by the same team that gave us such "classics" as "Man From Planet X" and "The Neanderthal Man"), then it is a rather enjoyable film, especially for its unusual premise. One quibble: it is a shame that the "Giant-Crab" element of the film was not exploited heavier. That being said, the cast was pleasant, the direction brisk, and the story entertaining.

Review by ash-kong from the Internet Movie Database.