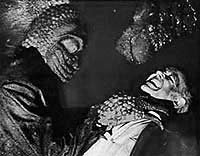 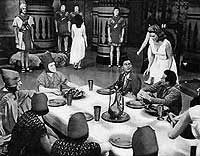 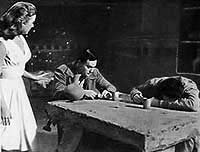 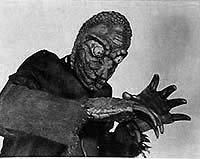 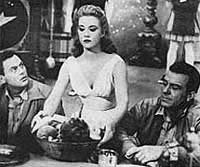 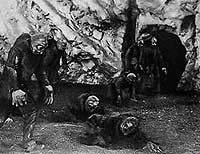 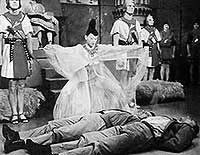 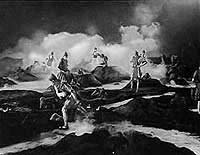 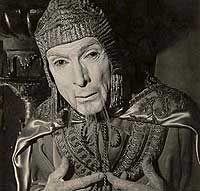 The Mole People starts in Asia where a team of archaeologists are busy at work doing archaeological stuff, a young boy brings top archaeologist Dr. Roger Bentley (John Agar) an old lamp with an intriguing inscription carved on it talking about the ancient god Ishtar. The boy claims he found the relic atop a mountain nearby, on a hunch Bentley decides to organize an expedition to the mountain top to see what's there. Bentley along with a few other men climb to the summit of the mountain & are mazed to discover the ancient ruins of a 5000 year old Sumerian city, in an accident one of the team falls down a large hole with the other's making their way down to help him. Once at the bottom a cave in traps three survivors down in the dark caverns & tunnels but help is at hand when they find a small number of albino human beings living there, the remains of the ancient Sumerian civilisation. Also living down there are the mutant Mole People but who should the archaeologists be more afraid of?

Directed by Virgil Vogel this black and white Universal Pictures sci-fi monster film was probably better back when it originally came out in the mid 50's, watching The Mole People today (as I literally just did) I can't say I was that impressed with it although having said that it passes the time I suppose. I guess I was expecting a fairly straight forward monster film about Mole People but they are more of a side issue, an afterthought by the makers who maybe decided they needed a monster of some kind & The Mole People is more of an adventure film where some archaeologists discover an ancient civilisation & become political pawns for power as they try to survive & get back home. At only 77 minutes long at least it's short, it moves along at a decent pace & the story is solid enough but I couldn't help but think the film as a whole was dull. It never really grabbed me, it never got my imagination going & I wanted to see more Mole People. The script actually makes the Mole People the victims rather than the aggressors & it's them we are supposed to sympathize with in an unusual twist for the period but because the Mole People are silent creatures who just seem to stumble around it's hard to feel that much for them & why didn't they revolt & fight back against their captors earlier? The often asked moral cinematic sci-fi question of who are the real monsters, them or us is asked but only in passing & without much conviction. There's the obligatory romance between the leading man & woman & one or two nice moments but overall I though The Mole People was pretty average.

The shots of the expedition climbing the glacier are taken from the German adventure film Die weiße Hölle vom Piz Palü (1929) while itself was later edited into The Wild World of Batwoman (1966). The Mole People look alright actually, I'm not sure why they wear suits but who cares. They are among the better monsters from this period although rather underused & aren't the villains. The film looks pretty good with decent sets & costumes, the make-up on some of the albino character's make them look like they are covered in wax but hey, it was 1956. There film goes for adventure rather than horror or suspense, there are a few scenes of Mole People dragging people under the dirt but otherwise there's nothing scary here. A bizarre introduction hosted by someone called Dr. Frank Baxter has him talk about strange theories about the Earth & it's core.

Filmed on a supposed budget of about $200,000 this is well made & looks quite good, you can tell it had a major studio behind it even if they didn't spend too much on it. The acting is a bit wooden like a lot of films from this era but the material they have to work with isn't exactly inspiring.

The Mole People is a decent enough little film, there's some monsters, a lost city & civilisation & some action too but I found it rather dull & the Mole People don't feature enough. Watchable enough if you can catch it on telly for free but there's no need to spend good money on it.