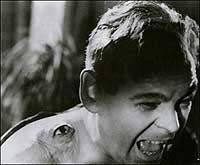 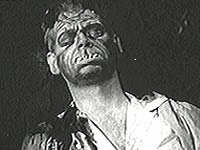 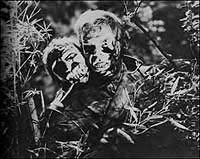 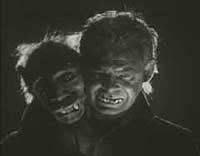 The Manster is set in Japan where an American named Larry Stanford (Peter Dyneley) works as a foreign news correspondent, Stanford is invited to interview a Japanese scientist named Dr. Robert Suzuki (Tetsu Nakamura) in his mountain top laboratory. While there Suzuki drugs Stanford's drink & injects him with an experimental serum he has been working on, at first Larry seems fine but soon changes as he becomes aggressive, hateful & rather unpleasant. Stanford begins an affair with Suzuki's female assistant Tara (Terri Zimmern) but this part of Suzuki's plan to keep an eye on him, soon Stanford begins to change psychically as well as mentally with an eyeball appearing to grow out of his shoulder which eventually grow's into another full size head. As a two headed freak Stanford goes on a killing spree but realises that his only hope is to go back to Suzuki & try to get him to reverse the horrifying transformation...

This American & Japanese co-production was directed by George P. Breakston (also credited as producer) & Kenneth C. Crane (also credited as editor) who manage to turn in a pretty decent little mad scientist monster film that is far better than many similar efforts from the same period. It has to be said that the two headed monsterman genre hasn't fared too well, the only two other examples I can think of are the much derided pair The Incredible Two-Headed Transplant (1971) & The Thing with Two Heads (1972) both of which are extremely silly films so it's somewhat of a surprise that The Manster manages to pull off the two headed monster plot with a degree of respectability. For it relatively brief 72 minute duration (brief when compared to some of today's two & a half hour marathon's anyway) The Manster is pretty effective, it's a strange film for the period as although it deals with horrible experiments which lead to a monster that kills people the script has an entire cultural subtext as it follows an American in Japan & there are plenty of way the script can be interpreted with Japan & it's culture 'infecting' Stanford & the scene at the end in which the brutish part of him that is brought out by the serum detaches itself & is destroyed (along with his Japanese lover) after which Stanford returns to 'normal' could be considered a racist attempt at making a point that Japan is evil & the aspects of it & it's culture infected Stanford & his salvation at the end is when this Japanese part of him is weeded out & destroyed. Or then again maybe I am just thinking about it too much. It's just that the script tries to suggest that Stanford isn't himself & that there's something wrong with him for shunning his wife & traditional American values, well that's the feel I get from it rightly or wrongly.

The Manster moves along at a decent pace, it takes itself pretty seriously & is fair entertainment. The Manster in feel & tone is closer to a Dr. Jekyll & Mr. Hyde split personality story rather than a two-headed monster film & you sort of sense the makers had lofty ambitions. There are some good scenes here with the infamous eyeball in the shoulder a particular stand-out & even the two-headed monster at the end looks alright although the hairy beast thing looks rubbish & there's also a disfigured woman that Suzuki keeps locked up. Talking of Suzuki it's never really explained what he hopes to achieve by the experiments he conducts or why Larry Stanford is such a perfect specimen, none of his experiments seem to mean anything. The opening titles feature a goof as the credits misspell the word original during the 'from an original story by' credit.

Actually filmed in Japan which is unusual for an American production at the time, shot in black and white the film looks fine & while it has dated a bit it's still watchable enough. The acting is alright, no-one is terrible but no-one is brilliant either.

The Manster is a pretty good late 50's black and white sci-fi horror film that tries to make a point about culture, adultery & controlling the evil inside us that is actually more fun when it's a straight monster film rather than a soap opera styled moral drama.