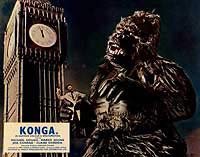 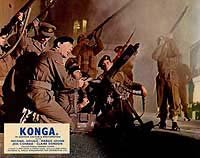 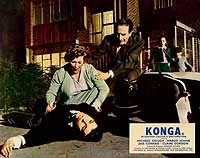 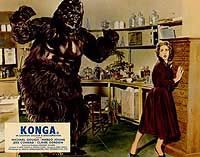 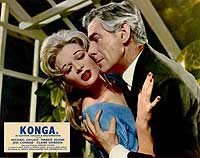 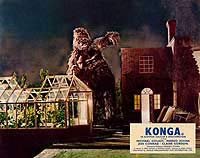 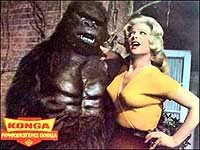 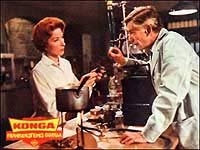 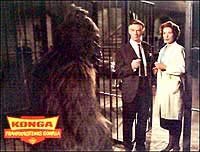 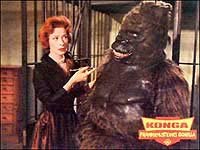 After poring over a still of this film's theatrical poster in my father's scrapbook, I managed to catch up with it in the late 1990s via a screening on the now-defunct UK TV channel "Bravo". I remember finding it silly then and, if anything, it proved even sillier now but, being able to appreciate the campy qualities in Michael Gough's histrionic central performance, it was a worthwhile revisit after all.

The film starts immediately with a cheap but effective airplane crash and then cuts to a year later with Gough's sudden return to London with a small chimp in tow; at his arrival at the airport he is met by a delegation (stretching to just 3 reporters!) and already he starts showing signs of a 'not- suffering-fools-gladly' attitude towards those scoffing at his outrageous theory of plants with human characteristics that can accelerate growth! His long-suffering secretary (Margo Johns), having lovingly nurtured the conventional plants in his glass-house, is shocked to see him ruthlessly dispose of them to make room for the new additions; the imported plants in his glasshouse (having fully matured inside of a week) have a surprisingly overt (but unintentionally funny) phallic shape – perhaps an addition of gay producer Herman Cohen?

Soon he is extracting the growth fluid from these plants and injecting them into his chimp (when a pet cat unwittingly sips the accidentally-spilt formula, Gough loses it and, to his assistant's amazement, shoots the fatally curious feline on the spot!) and, before you can say "Konga", it is turned into a fully mature ape. Transported around town inside his black van, it is used to eliminate those people who stand in the way of his reaching the goals he had set for himself in life: the patronizing college Dean, a fellow Indian scientist working on similar lines (George Pastell of Hammer's THE MUMMY fame) and one of his pupils (the boyfriend of a studious female Gough drools over and vice versa!), though the latter only after he gets one hell of a beating from him!

Though the film was obviously modeled on 1933's KING KONG (one, in fact, wonders why nobody sued given the blatant rip-off of the title and theme!), the script borrows from several other genre classics: 1932's MURDERS IN THE RUE MORGUE (via its trained or, in this case, hypnotized[!] ape), 1935's BRIDE OF FRANKENSTEIN (a 'rival' scientist offering the protagonist to join forces – though, perhaps owing more to budgetary constraints than anything else, the latter's creations are never shown!) and THE RAVEN (in the doctor's obsessive and unnatural desire for a much younger girl) and, of a more recent vintage, 1960's THE LITTLE SHOP OF HORRORS (the flesh-eating plants).

The film is reasonably solid until the last quarter of an hour when it unfortunately falls to pieces: incidentally, here we get perhaps one of cinema's most credibility-stretching moments with Gough seemingly so lost in pawing the heroine in the greenhouse that he is totally oblivious to Konga's extreme growth next door – literally coming through the roof and setting his house ablaze – but the fire engines and civil authorities from God knows how far away do hear the ruckus and come dashing onto the scene! Less outrageously, Johns conditions the ape to turn on its master (for having been unceremoniously jilted) without her ever having seen Gough perform the trick to begin with! Besides, the victims in the ape's hands are obvious dummies (Gough himself is thrown at the oncoming assailants); the latter, too, continually orders Konga to let him down and, when this fails, cries for help to the gathering crowd of panicking onlookers below!! When the military arrives and starts shooting at the ape, nobody seems to have any consideration for the human life in its grasp – and, with the sheer amount of ammunition fired via shotguns and bazookas (many of which are seen missing their target and a bomb even hits Big Ben without causing any damage), they would have mowed down a whole army of super-size gorillas!

For the record, not too long ago I watched another film by the little-known John Lemont, namely THE FRIGHTENED CITY (1961), a minor British noir which had featured a pre-Bond Sean Connery. More to the point, when still a kid, I had caught the notoriously campy APE (which I am actually more familiar with under the moniker SUPER KONG) that emanated from Japan in the wake of the 1976 KING KONG remake – I sure would like to re-acquaint myself with that one now...