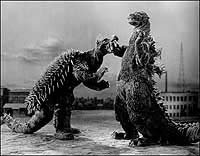 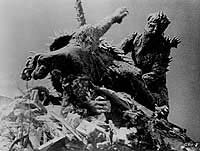 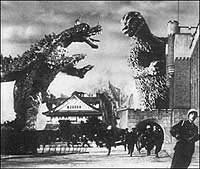 Perhaps the real reason why "Godzilla Raids Again" is not as popular as the first film of the series is because most people are more familiar with the butchered and dubbed English version titled "Gigantis the Fire Monster". However, when you look at that disaster of a film and compare it to Toho's original Japanese version, with no dubbing, no narration, no music or sound effect changes, you have one of the best 1950s monster movies. "Godzilla Raids Again", or "Godzilla's Counterattack" as its original title literally translates, is a flawed film. But like the first Godzilla, it's an allegorical classic. It symbolizes a different kind of horror that wasn't expressed in the first film.

The original 1954 classic "Godzilla" symbolized the horrors of nuclear war and the way that it can ultimately change the lives of people forever. "Godzilla Raids Again" focuses on a different perspective. It symbolizes the struggles of people still trying to adapt to life after a war and recover and try to resume their normal lives again. Godzilla and his very first opponent, Anguirus, are like weapons of war. They strike, cause enormous damage, leave ruins, and the people have to rebuild and try to get back on line again, until the weapons of war come back to attack them again. And the people still live in fear of the atomic bombs and other nuclear weapons, for they have brought back more horrors from the past and continue to bring them upon the world. While "Godzilla Raids Again" is nowhere near as powerful and allegorical as the first film, it is still one of my favorite Godzilla films. But once again, only in its uncut and undubbed print.

The English language version of the film is just another example of why you should never tamper with somebody else's film. It is an example among other Godzilla films and also Sergio Leone's "Once Upon a Time in the West", in which the American distributors cut the film down until it wasn't as compelling. When "Godzilla Raids Again" was distributed, they tore the film apart and changed it all. The most horrendous dubbing of any Godzilla film was put in, there was a lot of narration that ruined the original feeling of the film's atmosphere. But what was worst of all, they changed the monsters themselves. Godzilla's name was changed to Gigantis, his dark, chilling roar was changed to Anguirus' roar most of the time. A lot of the great sound effects of the monsters as they fought in Osaka were replaced, as was Masaru Sato's original music score. It was replaced with stock B-music and for what reason, I do not know why. A lot of other sound effects were changed as well. In the original print, Godzilla's death ray creates a loud, destructive kind of sound. But in the dubbed version, for reasons unknown, it was replaced with a wispy sound effect, like a leak in a hose.

Ignoring the existence of "Gigantis the Fire Monster", the special effects used in "Godzilla Raids Again" are very fine for the age. Unfortunately, they weren't as good as the Japanese Academy Award-winning effects presented in the first Godzilla film. At times, Godzilla's head and neck seemed too slender and the hand-operated puppet used in the close ups is just plain not good-looking. However, the suits used for Godzilla and Anguirus in their epic, realistic battle in Osaka looked fantastic! And what I loved most about this battle, is that it was a traditional, physical fight. The monsters bite, claw, and slam each other like real animals. Unlike in the future, when the monsters would mostly just bump into each other and fight with "beam wars". Godzilla's death ray is more like a last resort kind of weapon, something he uses when he's got a sense of victory, and spends the rest of his time biting and clawing at Anguirus, who performs the same actions. And unlike in the English version, the monsters don't continuously roar at each other, they mostly growl and snarl when fighting and roar once they have a brief stand-off every now and again.

But still, "Godzilla Raids Again", while it's an amazing monster film, has its flaws. Mostly, it's the fact that the monsters of the film do not have a whole lot to do with the story. In fact, Anguirus screen time ends after the first third of the movie is over. Maybe, he could have been used a bit longer for a more effective first appearance into the series. Godzilla himself, while the main plot point of the story, doesn't get as much screen time and scenes as he should get. The storyline just strays from him after the battle for too long and he doesn't really get anything else until the ending of the film.

But that doesn't mean a whole lot. Yes, "Godzilla Raids Again" is not the most action-packed Godzilla film there is. But it is, in its original version, one of the best monster movies there is. It presents a great symbolic message and should be examined by everybody for this reason. It is a dark compelling film, not as great as the first Godzilla film, but definitely one of the best.

May 7 2016, 19:26
The American version is such an exasperating hodgepodge that it's best enjoyed as high camp.

May 7 2016, 17:49
An extremely uneven effort and shows it's rushed origins.
Additional Off-Site Reviews: