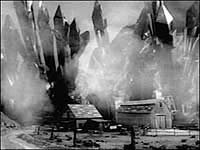 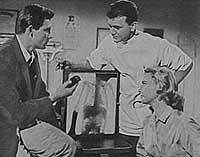 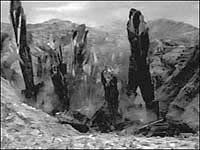 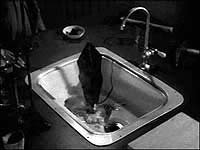 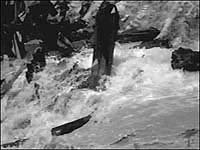 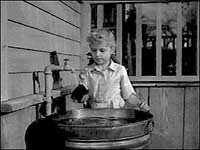 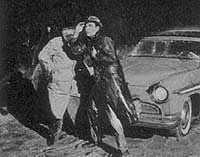 Perhaps it is all because of Grant Williams. Williams was a B film actor who was best known for his starring and titular role in The Incredible Shrinking Man, generally acknowledged as one of the most literate and high quality B sci fi films from the 1950s. In watching the DVD of his next noted film, The Monolith Monsters, I was struck by how well written a film that film is also, even as it is another B sci fi film. No, Williams' role in the 77 minute black and white film, from 1957-as was The Incredible Shrinking Man, is not as important as his role in the prior film, but his mere presence, it seems, raises the bar for the other actors. In a sense, he was a B film version of Marlon Brando, who always seemed to elicit the best out of his A film co-stars.

Another positive for the film is that, of all the 1950s horrormonsters from space films, The Monolith Monsters is likely among the most plausible scenarios to be explored- almost like an early version of The Andromeda Strain, save that the monsters are not microscopic and biological, but huge and chemically reacting black crystal columns that have no agenda. They are not aliens nor atomically irradiated mutants, just meteor debris that grows when it comes into contact with regular water, and is destroyed by salt water. The former property is shown early in the film when a rock gets some water accidentally poured on it when a car radiator overheats and its driver pours in water. Even worse is that the rocks can turn people to stone, once the water has activated their mysterious otherworldly properties.

The credit for the bulk of this film's success, however, belongs less with its director, John Sherwood, who was directing only his third low budget film, and more with the film's co-writer- the science fiction writer and film director Jack Arnold, who also helmed two classics of 1950s sci fi and horror: The Creature From The Black Lagoon and This Island Earth. There are the standard sci fi inexplicabilities; such as all the right folk are right where they are needed at exactly the right time, no one calls the Feds, nor the National Guard, petrifying limbs would fall off with gangrene, etc., and other sorts of silly science, but the wit and dialogue (especially in a brief scene with veteran B film actor William Schallert as a discombobulated meteorologist trying to tell Dave Miller when the thunderstorm is expected to end) are first rate. Arnold's co-writers on this film were Robert Fresco and Norman Jolly, but the film has all the hallmarks of a classic Arnold film. Why he did not direct it is probably only because he was juggling many other film projects at the same time.

The film also pulls off a rare feat- its ominous opening voice-over monologue by Paul Frees, who forebodingly intoned the opening of many sci fi films, marveling over the wonders of 'Science!', and such, and was also a voice for The Rocky And Bullwinkle cartoon a few years later. His booming voice was ripe for parody, and that he undercuts some of his own pomp shows how good an orator he was, for he opens this film with a monologue that both satirizes and pays homage to even worse monologues from far worse films. It starts out, 'From time immemorial, the Earth has been bombarded by objects from outer space; bits and pieces of the universe, piercing our atmosphere, in an invasion that never ends,' and gets even better, or worse, from there. Then we see the meteor crash, which is another version of the same scene from the earlier Arnold-directed Universal film, It Came From Outer Space. But, the film also succeeds with some fairly innovative low budget special effects, from cinematographer Ellis W. Carter. The effect of the growing monoliths, which grow in size and depth, was never revealed, but likely done by the optical illusion of forced perspective, by pushing the monoliths through the set, for the upward height, and moving the camera toward them as the camera zooms outward. A similar technique was used to great effect in Alfred Hitchcock's Vertigo.

The DVD is part of a five film, three DVD package called The Classic Sci-Fi Ultimate Collection. Well, not really, but The Monolith Monsters shares its DVD with Grant Williams' other film of note, The Incredible Shrinking Man, directed by Arnold. The other three films in the set are Tarantula- another Arnold flick, The Mole People, and Monster On The Campus- which featured Troy Donahue. Despite the Ultimate in the pack's title, the only extra feature The Monolith Monsters comes with is its original theatrical trailer. As Arnold and Williams are key 1950s sci fi figures, an expert in that era's genre films would have made for a potentially great audio commentary. On the plus side, Universal did a superb job in restoring the film- the transfer is stunning and almost wholly blemish free, and in its original 1.33:1 aspect ratio. Also, of note, is a quite effective film score by a young and uncredited Henry Mancini.

The Monolith Monsters is not a great film, by any means, but it's a damned good B sci fi film, leagues above the usual crap from that era, or any era, and because of its hints of plausibility, and being played straight, it traverses that thin line between cheesiness and real drama, and tropes toward the better side.

Review by Cosmoeticadotcom from the Internet Movie Database.