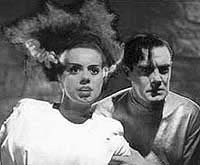 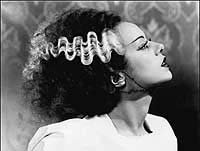 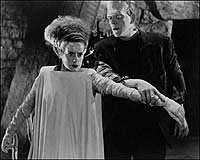 Bride of Frankenstein was the last and the best of the superbly great James WhaleUniversal Studio horror films of the 1930's and is hands down the best of all Frankenstein films (which go as far back as 1910) and is certainly one of the true quintessential's of classic black and white cinema. Brilliantly conceived from the ground up by the versatile and uniquely talented British film director James Whale and as far as horror films go in that era (31'-35') - Whale was in a league of his own.

I find The Bride to be superior in every way to the original Frankenstein film (also directed by Whale and starring Karloff) more money, more experience, more inspiration and more creative freedom seem to be the key reasons why. Every aspect of this uniquely brilliant film is of exemplary quality: casting, make-up design, script writing, lighting, photography, set design, musical score and most importantly inspired and imaginative direction, an absolute tour-de-force of talent and conviction from all involved. It's hard to drive home with words, just how colorful, entertaining and downright ingenious this ultra-classic film is.

The gangs, mostly, all back: Colin Clive energetically reprises his role as Dr. Henry Frankenstein, a 17 year-old Valerie Hobson replaces Mae Clarke in the role of Elizabeth Frankenstein, Dwight Frye is back as a character very similar to Igor - just not a hunchback this time and the best for last, the dynamite performance of Ernest Thesiger as Dr. Praetorius. What Thesiger does for this movie can not be understated, he's beyond brilliant in his role as the evil and manipulative Doctor Septimus Praetorius and every scene he's in he has full command of. He's supremely confident in his evil ways and it's always a delight to watch him plot, scheme and blackmail to get what he wants. His performance is often mentioned for it's "arch effeminacy", "waspiness" and overall flamboyance - in any case this wickedly colorful and off-kilter performance surely must put him in the top ranks as the ultimate mad scientist. A type of role meant for master thespians only. Simply put, Praetorius is one of the best and most entertaining film characters ever devised.

As stated earlier the casting is brilliant in all the main roles, as well as several side characters such as, Una O'Connor, E.E. Clive, O.P. Heggie and Dwight Frye. Karloff's take on the Monster is among the best acting of his career, offering an infinitely more compelling performance the second time (of three) around; that and the "Monster Makeup" crafted by the masterful hand of Jack Pierce never looked better. When factoring in every aspect of this most iconic of make-up designs such as, the singed hair (monster's shouldn't sport BANGS!!!, as was seen in the first film), the multiple head claps, and the fact that Karloff's face was simply as bit fuller four years after the first film, which seemed to vantage the overall balance and effect of the famous monster make-up. Like I said "iconic" is the word, and having seen other actors portray the character over the years, the make-up definitely never looked better than when Karloff wore it.

Like every other facet of this movie, the effects are TREMENDOUSLY FINE, much like the Jack Pierce make-up design, Kenneth Strickfaden's electrical gear is as iconic, as it is immediately identifiable. Frankensteins laboratory never looks or sounds any better than it does in this film and once all it's electrical machines begin to fire up and shot sparks and smoke - the laboratory itself qualifies as a character in and of itself. Some of the most electrifyingly lurid visuals ever committed to film happen during it's glorious high-voltage finale; which would have been impossible without the spectacular spark-spewing Strickfadenian electrical apparati! Truly wicked a sight to behold.

What about it's music? An early cinematic musical masterpiece is what composer Franz Waxman created for The Bride, said to be the first all-original film score featured in a horror film and after all these years it's still one of the very best. Waxman's music is all it Needs to be, When it needs to be and then some. My favorite aspect of the score is the ultra-exotic high-pitch 3-note motive that represents the Bride herself. This film is famous for a number of reasons, one of which is it's innovative lighting and photography, handled through varying degrees of sobriety by the great John Mescall. I've read articles that state that this film, from a lighting perspective, is one of the most beautiful films ever - I couldn't disagree on that point. You'll see some of the best looking diagonally-filmed camera shots ever created, near the end of the film inside doc's lab; followed by an amazing montage comprised of shots involving both Dr. Frankenstein and Praetorius and, of course, all the amazing electric machinery found therein - running wide-open, crackling and spewing sparks all over the place.

Some of the stand-out scene's of The Bride, include: first and foremost the amazing finale in the laboratory, Praetorius's picnic in the crypt, "the bottle sequence", the blind old hermit scene and when the monster is tracked down and lynched by angry villagers - among others, there's never a dull moment with the Bride of Frankenstein. It's feverishly creative monster-movie-making of the highest order.

In the end, few films can match the level creativity and the overall air of intrigue that this film possesses and what that all equals up to, is the most charmingly fascinating 75 minutes you're likely ever to see - not a bad effort for a film as vintage as 1935. And after seeing it on Blu-ray I can say without the slightest hesitation, that The Bride has aged beautifully, downright regally over the past 81 years. For that matter really having aged scarcely at all, because The Bride is a timeless work of art.