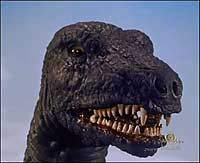 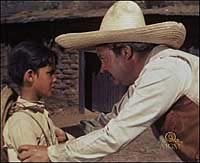 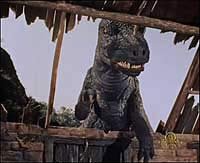 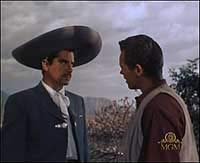 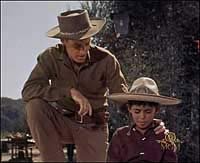 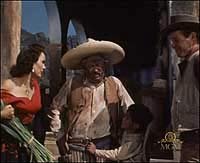 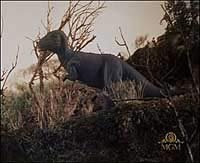 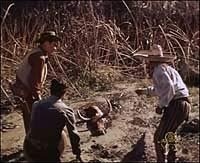 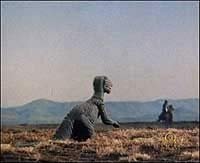 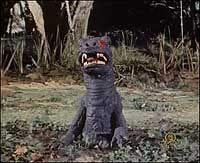 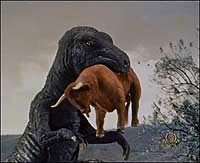 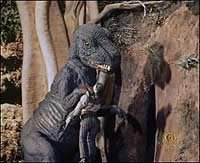 The Beast of Hollow Mountain tells the extraordinary tale of an American cowboy named Jimmy Ryan (Guy Madison) & his Mexican partner Felipe Sanchez (Carlos Rivas) who own a piece of land in the back country of Mexico where they breed cattle, it's a cushy little number & the scenery is nice but lately they have been having problems. Some of their cattle, that's right THEIR cattle, have disappeared & they ain't happy about it. Now it's personal, could it be the local villain Enrique (Eduardo Noriega) who owns a rival ranch? Could it just be bad luck? Or could it have something to do with the terrifying legends of monsters that surround Hollow Mountain where the cattle disappeared? I ain't telling you so if you want to know how this gripping story unfolds you'll have to watch it yourself!

This Mexican American co-production was directed by Edward Nassour & Ismeal Rodriguez & is pretty monstrous in all senses of the word. The script by Robert Hill is a horrible mixture of a western & a dinosaur on the loose monster flick & neither compliment the other that well. For a start I wanted to see more of the 'Beast', it doesn't make an appearance until after the 40 minute mark & even then it's just it's shadow & it's not until after the hour mark until we finally see the 'Beast' in all it's jerky stop-motion glory. So basically all us die hard monster fans have to sit through over an hour of what is best described as a horrendous western about a feud between two cattle ranches as nobody knows about the existence of the 'Beast' so it isn't even mentioned. There's an awful comedy relief fat geezer & his annoying son, there's the love interest &, well, not much else as it plods along. By the time the 'Beast' does show itself it felt like I'd been sat there watching it for hours! The dialogue is corny, the character's are clichéd & this really is quite hard to sit through, the dinosaur scenes save it a bit at the end but they look so poor & it does so little they have minimal impact.

Directors Nassour & Rodrigeuz do alright, I suppose it's due to when it was made but the cast of cowboys in their brightly coloured shirts, sombrero's & cowboy hats look utterly gay & camp. There's no realism here at all. The dinosaur was animated using 'replacement animation' where lots of models of the same character were made in a slightly different pose & when filmed one at a time an illusion of motion is achieved, as far as I'm concerned it looks terrible. I'm sorry but it looks just like ordinary stop-motion animation only worse, it's far more jerky & less convincing. What's with having the dinosaur waggle it's tongue all the time? There is also an hilarious shot of it walking along, there's a close up of it's feet & legs which is obviously an actor walking along in terrible looking rubber monster legs & they even forgot to give him a tail! There's no blood or violence & only one person is shown to be killed by the dinosaur. You know I have to say I felt a bit sorry for the dinosaur, I mean it's not his fault he exists is it? He was just finding food to stay alive wasn't he? Why did all those gay looking cowboys have to murder it? They wiped out the last remaining one of it's species, it's now extinct. I hope those multi coloured cowboys are happy now.

Technically the film is alright, awful dinosaur effects apart it's well filmed with some nice bright widescreen cinematography which uses the locations quite well. The acting is, well, lets say stiff. They probably couldn't get over what they were made to wear.

The Beast of Hollow Mountain is an unsuccessful mix of western & monster film, there's nowhere near enough 'Beast' in it to make it a worthwhile viewing experience. More or less remade as Valley of the Gwangi (1969) as cowboys once again take on prehistoric dinosaurs!