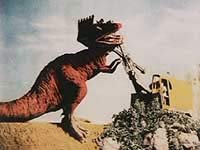 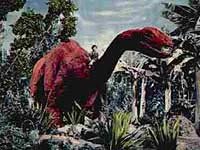 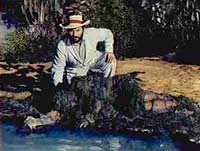 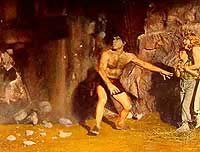 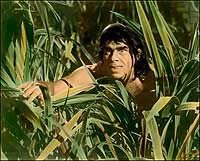 Dinosaurus! is set on a Tropical Caribbean island where construction work is being carried out to construct a proper harbour, while doing so site manager Bart Thompson (Ward Ramsey) lets off some underwater explosives which reveal two prehistoric Dinosaurs a Tyranosaurus & Brontosaurus. Realising they might be of interest Bart has them brought ashore, that night while everyone is in town a fierce thunderstorm rages outside. A lightening bolt hits the two dormant Dinosaurs & incredibly brings them back to life! The Brontosaurus is a nice vegetarian type chap so he ain't a problem but the Tyranosaurus is a flesh eating meanie who hasn't had a decent meal in literally millions of years & with all those tasty islanders running around he's got plenty of food to choose from, it's up to the heroic Bart to save the day & the islanders from becoming Dinosaur food!

Co-produced & directed by Irvin S. Yeaworth Jr. this 60's monster flick isn't too bad if your expectations are low enough & are looking for a undemanding way to pass 80 odd minutes, it certainly isn't a classic by any stretch of the imagination but I didn't think it was as bad as it's reputation suggests. The script by Dan E. Wiseburd & Jean Yeaworth (wife of director Irvin...) is pretty silly really, preserved Dinosaurs brought back to life by a lightening strike? The isolated island location sort of reminded me of the setting for Jurassic Park (1992) although that's where the comparisons stop. The character's are wooden & rather dull, people don't really behave in the way you would expect when faced with a huge man eating Tyranosaurus although the film does have a certain naive charm about it. I must admit I quite liked the Dinosaur scenes, they were fairly fun to watch & the sequence at the end where Bart fights the Tyranosaurus in a huge construction site crane is neat & imaginative. I wasn't too keen on the comedy relief Neanderthal man who was surprisingly well shaved & clean cut! If you expect something like Jurassic Park you will be disappointed, if you expect a mild, somewhat dated & innocent 60's monster flick then you might have some fun watching it just as I did.

Director Yeahworth doesn't do much with the actors side of the film, most of the scenes involving the human cast are static, wooden & poorly staged. Now on to the special effects, or rather the not so special effects. The Dinosaurs are brought to 'life' via both stop motion animation when the Dinosaur is seen in full & puppet shots when just the head is seen. The effects can be described a primitive, they certainly aren't going to impress anyone these days but while watching Dinosaurus! I always felt the makers were giving it their all & really trying. OK, they obviously didn't have the technical ability or budget to succeed but there are some ambitious sequences like the Tyranosaurus & Brontosaurus fight & the climax where Bart fights the Tyranosaurus in a crane. The lighting between shots isn't great though, the actor looks like he is in bright daylight & when it switches to a special effects shot the sky is a completely different colour.

With a supposed budget of about $450,000 this is reasonably well made partly on location in St. Croix in the Virgin Islands although it's very noticeable when the action switches back into the studio. The producing & directing team of Yeahworth & Jack H. Harris were responsible for The Blob (1958) & it was originally intended Steve McQueen to star in this but they dropped the idea after they found out McQueen was so difficult to work with on The Blob. The acting is rather wooden from everyone involved.

Dinosaurus! is a fun little film that will pass an afternoon away harmlessly enough if you give it a change & don't expect too much, it's not brilliant but it's not too bad either.