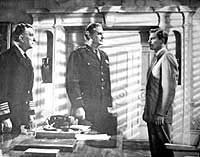 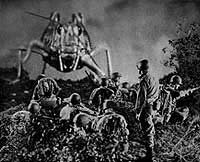 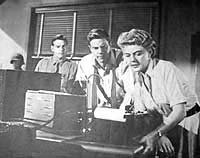 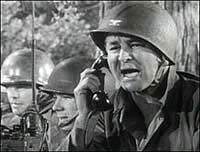 Still in the year of 1957, the year of the sci-fi thriller it seems. Its pretty clear to see that this movie came to be purely from the success of 'Them!' which revolved around killer ants. Although I really have no idea which giant bug movie was thought up first from the vast array of clones. Considering this is about giant locustsgrasshoppers, which are hardly terrifying really, leaves me to think this may have been all that was left to utilise after the obvious bugs like scorpions, mantis, slug-things etc...were all in production.

So what's this all about you say? well let me see. A small town with all its inhabitants vanish, well the people vanish, the town is destroyed. Onto the case stumbles a young attractive journalist who smells a rat and starts to poke around. After much dialog and wondering around from place to place we finally meet up with the good looking Dr Wainwright who is experimenting with radiation on crops to make them bigger. Hmmm I wonder if this has anything to do with it. Why yes! low and behold grasshoppers managed to eat some of the infected crops and now they are as big as a barn. Standard procedure then requires that the army (national guard) be brought in to try and stop the giant bugs, which of course proves ineffective. Thusly we are draw into a tense situation as Dr Wainwright and his attractive journalist partner must come up with a devious plan to stop the mutant hordes.

Basically this is a complete rerun of 'Them!' only with much worse effects. The actors are merely props for the movies giant bugs which clamber around over awkward models. The funny thing is, the giant bugs don't actually turn up for ages! not until the 27 minute mark. Up until that point the acting is actually pretty good strangely enough, you'd think this was a proper suspense movie. Both Peter Graves and Peggie Castle are very engaging in their respective roles. I wasn't sure which way Graves's character would go to be honest, kinda thought he might be some kind of loony scientist villain for a time. Castle of course does everything a woman would do in a 1950's B-movie, scream and look pretty, but she is also quite a strong character when it comes down to it. The only other character that stuck was Morris Ankrum as Gen. Hanson who came across as the stereotypical gruff military type with a buzz haircut, almost like a Jonah Jameson type character.

Once the giant bugs appear everything goes downhill terribly I can't lie. Basically what they've done is enlarged rear projection footage of real grasshoppers against the live action of the actors. This, of course, is nothing unusual in these type of movies (every driving scene ever!), but the fact that the footage is clearly real grasshoppers makes it ridiculously stupid. In other scenes they have used traveling matte effects as the bugs shuffle across live action footage of the actors, again looking awful and disjointed. But the worst has to be the cheap-ass visual effect of having the hoppers crawling on a large photo of a building...and pretending its a real building. Its actually a real eye-opener because you can clearly tell its a photo. There are one or two model shots of Chicago when the bugs attack the city, but again its so very obvious, clearly tiny bugs bumping into models.

Its not all bad though, the action is quite intense at times when the actors break out the big guns and machine guns, blasting away at nothing. You could almost be fooled into thinking you're watching a gritty war flick at times. Sadly that's all though as nothing much else happens here, you don't see any form of death or attacks or anything. Every time a hopper is about to eat someone the matted hopper just moves over them and it cuts away, there is no destruction or carnage at all which makes it hard to engage in the fantasy. I'm not expecting blood and gore of course but you can tell that they weren't able to do anything due to budget limitations and the fact the hoppers were matted on top. There is never any life size modelspuppets of the hoppers to interact with the actors. Don't even get me started on the finale where they drown all the hoppers, clearly real hoppers filmed in a small tube of water.

I think the most interesting aspect of the whole movie is the stock footage, of which there is a lot used. There is of course lots of footage of the military in action, training wise and real war time stuff (I'm guessing), which is interesting to see...for obvious reasons really. Other stock footage shows in and around 1950's Chicago which was also pretty cool I thought, amazing to see the changes.

Now I did enjoy this but mainly for hilarious reasons. Its not exactly the same as other bug B-movies, for instance there was no smartly dressed, old fashioned, crusty old scientist guy who knows everything, and they don't kill the bugs with any weapons here, they just use their ingenuity. Errr...but that's about it, every other cliché is here from the screaming female to the gruff military dude, and of course the movies poster is awesome but doesn't represent the movie whatsoever. This definitely comes under the 'so bad its good' banner I think, hokey effects, cookie cutter plot, but decent acting amazingly.