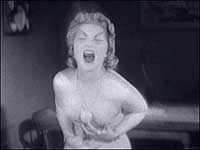 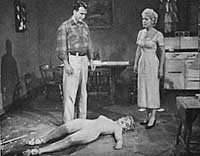 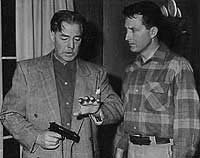 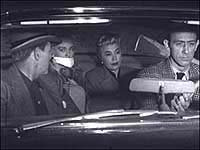 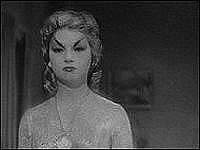 Saw this at my neighborhood theatre when I was seven. It not only scared me, it stayed with me in an eerie way, which I'll explain momentarily. The movie features one of those rare feminine monsters (think about it - how often were monsters women?). As I expounded on in my comments for 'Terror From The Year 5000', female monsters always frightened me much more than normal monsters and this was the first one I ever saw. To disturb my poor eight year-old psyche further, the glowing she-monster here was so shapely that I found myself feeling, um, stimulated in a certain way while simultaneously feeling stark terror! The look of her really did scare me but, unlike with most monster movies, I was unable to bring myself to close my eyes when she would appear.

Around this time in my life I was taking guitar lessons at the local conservatory of music and my teacher just happened to be a nice looking woman (actually, probably a teen, but at eight who can tell the difference?). One night, while sleeping, I had a dream and the astounding she-monster made an appearance in it and for some reason she turned out to be my guitar teacher. But she was every bit as deadly and when she started toward me I woke up terrified. For the next eight years or so, this glowing apparition made intermittent appearances in my dreams and always woke me up when she did. It stopped somewhere around age seventeen (thank heaven).

You would think that I would have avoided watching this source of personal nightmare, but you'd be wrong. The fact that she made appearances in my dreams just added to my fascination with this movie and I have watched it at every opportunity throughout my life. Naturally, as time marched forward, those opportunities became fewer and fewer until they stopped completely (for me) in 1984 - the last time it was run on a late-show that I know of.

Recently, I was able to obtain a VHS copy. After doing so I began to wonder if there were any others who have as strange a connection to this film as I. I began with a Shirley Kilpatrick google search that eventually led me to a forum where the film had been earnestly discussed and I read through all the posts of that thread. One poster revealed that he had made a tradition of watching 'The Astounding She-Monster' once a year and another poster asked him why. Of all movies, why this one? His answer truly struck a chord within me - he said that when he watches this movie, the entire outside world disappears for him. Further, he describes how the film seems so existentially dreamlike - all that running around, ending up back in the same place over and over.

Exactly right. I know just what he's talking about and for a long time I lived it repeatedly in my sleep. And by the way, I watched it last night and shivered when she appeared at the window the first time.

Review by worldsofdarkblue from the Internet Movie Database.