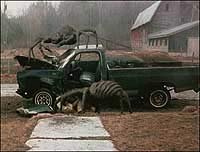 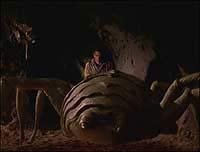 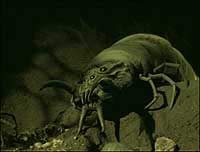 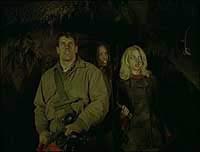 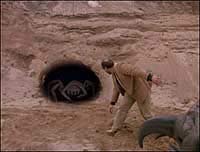 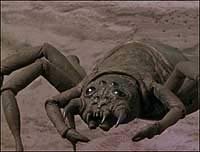 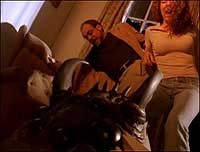 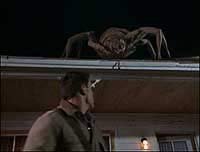 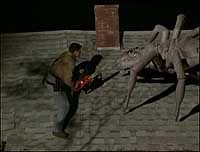 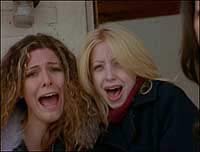 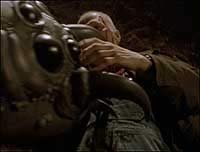 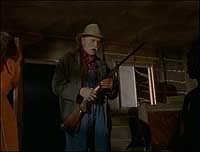 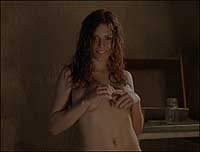 The title makes it sound like a cheesy B-movie and that's exactly what ARACHNIA is: a no-budget giant spider flick from the guy who brought us A NYMPHOID BARBARIAN IN DINOSAUR HELL. Thankfully this is a lot better film, better paced and more fun, although the budget is as equally low as in that film.

The plot is predictable and routine from the outset: a bunch of B-movie types are in a plane crash (fun models) and then take refuge in a run-down farmhouse. The film manages to mix in various bits from lots of different genre movies and, admittedly, it is fun playing "spot the rip-off". We get the egg-hatching scene from ALIENS (complete with a queen spider – huh?), the chainsaw action from EVIL DEAD II and the besieged farmhouse scenario from NIGHT OF THE LIVING DEAD, plus lots of other bits and pieces along the way.

The director goes all out for sleaze, with a one-dimensional female character that strips off for a gratuitous bath scene, and a ridiculous lesbian interlude that just serves to provide titillation for the male viewer. Acting is pretty bad, with the best role going to David Bunce as a despicable college professor; he's suitably slimy and weedy in the part. The female characters are bimbos, the actresses poor, but not as bad as Rob Monkiewicz, who thinks he's Bruce Campbell! Instead he looks like Richard Bacon, the former Blue Peter presenter, and he simply doesn't cut it as the heroic lead.

The script acknowledges that the film is a cheesy B-movie through and through, so there's plenty of humour along the way. Some of it works, a lot of it falls flat, but for what it's worth I enjoyed the movie. The giant spiders are animated through stop-motion as opposed to CGI, and, while the animator is no Harryhausen, the special effects are surprisingly decent! The stand-out is when two spiders have a tug-of-war with a human corpse, tearing all the limbs off in the process. Lots of people are critical of the jerky fakeness of stop-motion but I know I'll always enjoy seeing it on screen; if I had to choose between the spiders here and the ones in EIGHT LEGGED FREAKS I'd pick this movie every single time. Sadly the bloodshed in the film is minimal, which is surprising considering the level of nudity on display.

In the end, ARACHNIA succeeds because it offers up what B-movie fans are looking for. There's a guy battling a giant spider on a roof, wielding a chainsaw; there are Molotov cocktails galore, lots of exploding spiders, and an end-reel appearance by the air force, who kick ass. My favourite scene, though, is the kicker where a cocooned guy's chest explodes and mini-spiders dart-out, a virtual re-run of a similar moment in ALIENS. You've just gotta love the fact that the film-makers had the audacity to shoot this scene!