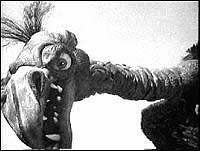 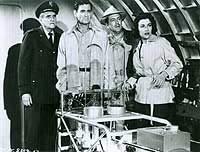 "The bird would be defenseless then except for beak, claws and wings, you could hit it with everything but the kitchen sink! We've got kitchen sinks to spare son."

"Hey man, who's afraid of the big bad bird!? PUT OUT YOUR LIGHTS - GET OFF THE ROAD! Don't worry about us we've got salt for it's tail!"

"That makes me chief cook and bottle-washer, in a one-man bird-watcher society."

Before there was Pete "Maverick" Mitchell, there was another rogue of reckless daring who flew by the seat of his pants, his name was: Mitch MacAfee! A fearless warrior of the sky, inspired inventor and gallant lover. Let us now enter the world of THE GIANT CLAW! The sky's are turbulent and Mitch MacAfee is taking heavy flack from all angles - from a string of dutiful, but doubtful Majors and Generals, the quick tongue of a beautiful, but skeptical mathematician and most importantly a giant, extraterrestrial, force-field generating, bird that's the "size of a battleship"! With the cards stacked steeply against him and having ONLY 72 minutes to complete his mission, before the end credits are set to roll, the odds seem insurmountable! CAN Mitch MacAfee corral the Generals? CAN Mitch MacAfee defeat the forces of evil? CAN Mitch MacAfee, the ace of the skies, save the world from THE GIANT CLAW!!!

With all sarcasm and humor aside just what is The Giant Claw all about? It's about a giant bird from outer-space that's come to roost, but it has a hellish appetite for destruction and attacks anything that moves. Meanwhile jack-of-all-trades Mitch MacAfee, with the assistance of a beautiful young mathematician (Mara Corday) and some cantankerous old military officers try to uncover the mystery behind a sudden rash of mysterious airplane crashes. The military doesn't believe main-man Mitch's account at first, but after further quarreling with the military brass face-to-face and over the phone ("joke...false-alarm, look here General what kind of infantile jack-ass do you take me for!") he produces his theory of that of a spiraling flight path, that the mysterious winged menace is thought to be on course with. In short, the beast must be found and eradicated: ASAP! This cheaply produced, black and white, sci-fi film from the late-fifties, clocks in at a mere 72 minutes in length and is for the most part brisk in pace and often looks down right stark and minimal in appearance, with no fancy sets our impressive art direction to speak of, no doubt due to it's minimal budget. Yes, The Giant Claw has all the tell-tale signs of a film that was "grinded out" quickly and cheaply, hence it's known as a "cheapie" and that fact is never more obvious, then when you see the special effects that were used in this movie - they are unbelievably dated and positively riotous!

The Giant Claw is a film that's composed of three easily discernible elements that are all represented in equal proportions, the movie is one third drama, one third action and one third unintended comedy. For me it's the films awesomely comical-looking effects, that make the movie for me and it's because of these effects, that the movie becomes something of an accidental comedy. From the outrageously ridiculous looking puppet used to represent the giant bird, to the cheap looking model planes and train-set's that were used, in which they typically emit smoke and sparks, this has a way of making these "vehicles" look more like fireworks. Simply put, when deliberating how to bring their "terrifying winged-monster" to the screen, the producer's of this film chose the most incredibly stupid-looking puppet imaginable. I think it has a lot to due with the large tuft of long stringy hair on the top of the puppets head, though it could be the whiskers (Yes, the It-Creature has whiskers!) or maybe it's the beady eyes, but more than likely it's all the above. Why this thing looks bad even for the primitive standards of the 1950's and I find it impossible not to laugh out loud whenever I see it, none more so than that magical first viewing of several years ago - this ridiculous flying contraption with set you on your ear! It's a thing of pure comedy and it's been said that when this film had it's premiere in 1957, it's audience could not stop laughing at THE BIRD!

Among all that is cheap, dated, and simply bad, about The Giant Claw, there are precious few positives to mention. I can confidently say that the cast did a much better job, then the effects crew did, but that's not hard to do. The screen-writer obviously had a colorful mind, because there's some catchy dialog exchanged in several scenes throughout the movie. As far as the films jargon goes, it's flavored with a pinch of superstition, as well as a heavy dose of scientific psycho-babble and it pretty much seems as if their making up physics as they go, as you'll see near the end of the film; and take notice of just how quickly they design and build their one-of-a-kind ray-gun (where would a vintage sci-fi film be without ray-guns). Then about 57 minutes in there's this great scene, that involves a convertible hot-rod, which is brimming with a pack of rowdy high-school's, who are loudly and recklessly motoring down the road at night, despite the mandatory curfew and black-out precautions. This whole sequence packs a great authentic feel and sensibility and serves as a sort of miniature period piece, they even thrown a "Hey, Daddio!" into the scene, great stuff and very true to the time period.

My advise is watch this simply for the laughs, because it offers little else.