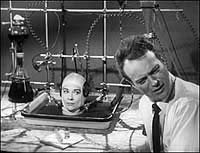 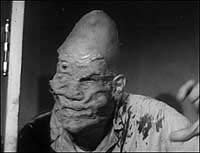 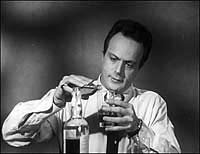 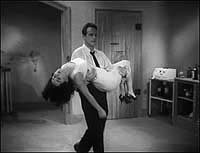 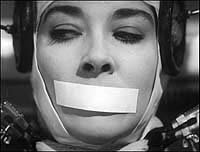 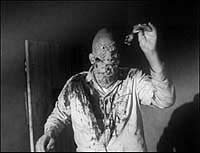 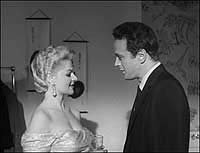 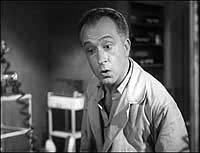 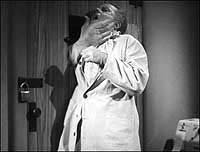 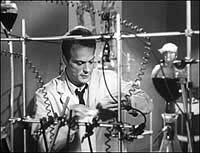 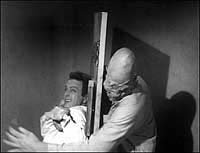 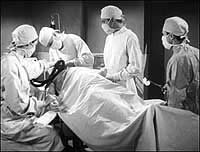 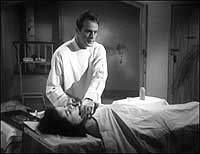 Some surgeon--collaborating with his surgeon dad--steals limbs from the discard pile to supply nefarious experiments at "the country house." Give Junior some credit: when dad's patient went Code Blue on the table, Junior's serum brought him back to life! (Dad mocked and mumbled about deleterious side effects, but Junior was like, whatever.)

Junior's fiancée (Jane?) wanted to know the scoop at "the country house." That, and Bill's earlier "emergency" call, motivated him to floor the pedal. Lo, curves ahead, and the fiancée burned to death--except for her severed head, which Junior saved (we see him wrap some treasure in his jacket, anyway), trudging uphill to the country house, conveniently located near the accident scene.

The emergency was that "it" became so violent that it almost broke out of the closet. "It," played by "Jewish Giant" Eddie Carmel, was the sum total of all of the surgeon's failures. Our first hint at the horror is Bill's withered, deformed arm. But Junior's interest lies more in saving his fiancée's detached head in a casserole dish of ducts, tubes, and Habitrails (sans hamsters, sadly) than in bemoaning his failed Heathkit. Though Jane repeatedly extols her telepathic capabilities, about all she can muster is to command her seven-foot pet, "Knock once for 'yes', twice for 'no'." You won't score a Ph.D. from Duke's famed parapsychology squad for THIS shoddy work!

So, what's up our surgeon's sleeve? He wants to kill a gorgeous prostitute as a host for Jane's head and brain. He discovers and befriends a gorgeous but facially disfigured girl, brings her home, and slips her a mickey. Zonk! Lights out!

Meanwhile, Jane has exercised her penchant for Schadenfreude. Bill calls Jane a 'monster' subsisting on hatred while "it" in the closet is more partial to roast chicken. How unfortunate that Bill forgot to lock the little latch that permits him to insert food and such into the closet (though I wonder how they extricate the urine and feces! man, it must stink to high heaven!): for, at a signal from Jane, the monster grabs Bill's good arm and tears it off. Now, when I last saw the movie in 1986, the surgeon clearly saw Bill's denuded humerus hanging from his scapula when he got home and checked out the lab, but good old TCM spared us this detail. Yet, the censors still permitted Bill to decorate the office for us (again, during our absence) with generous smears of blood as he writhed and contorted--all over the lab, up and down the stairs--kind of like the modern artist who proudly composes "Supine Apotheosis with Sausage Quintets; or, Multicolored Zapotec Boots" with his paint-smeared feet.

Well, back to the body-A-plus-cheek-F prostitute to whom the surgeon slipped the potion. He carries her unconscious form downstairs to the operating table, planning to decapitate her and sew on Jane's head, thereby building a new Jane. But, disapproving Jane engineers her surgeon hubby to a position right in front of the (still unlocked) closet door hatch and yells, "Now! Kill him!" The hatch ominously swings open. A huge, nicely manicured hand reaches through the door and grasps the surgeon's chin, simultaneously pulling and pushing with sufficient strength to rip the door right off the hinges and permit us to revel in the glory of grade-B 1962 costume work. Harryhausen would vomit; even Prohaska--who wasn't above playing an asbestos-skinned tunneler on Janus VI or a horned white gorilla on Neural--would gag.

Our seven-foot cone-head (IMDB insisted on the dopey comma) sports lumps and bumps; limbs of variegated sizes; teeth and lips that do justice to 1980's "Elephant Man"; one eye that points forward; and another eye, a good six inches north, that looks squarely at Rigel. Brrr! The monster knocks down the Bunsen burner and sets fire to the lab; he also knocks the surgeon to the floor and throws the door to the side. Thanks to the TCM censors, we miss another lovely 1986 scene, where the monster takes a generous chomp from the surgeon's neck. (I mean, even a dummy can recognize the discontinuity when the music suddenly jumps; the creature instantly rematerializes from this corner of the room to that one; the standing, cowering surgeon is suddenly motionless on the floor; and the monster's tunic sports a fresh blood stain beneath his chin. Whatever: the noble savage assesses the scene, rescues the prostitute, and trudges up the stairs on his way out of "the country house."

You know, I really wonder what a passing police officer would say of a horribly disfigured, seven-foot monster, dressed in blood-soaked surgical scrubs, carrying a girl (most likely, an incessantly screaming--once she's woken up--girl), but that's not our evident concern.

Ah, well away: in the interest of cinematic balance, we are treated to a closing philippic from Jane: "I told him to let me die!" Not exactly Ray Harryhausen for special effects, and, for plotting, certainly no Maupassant, but the disfigured dude was worth the wait. Other than that, the picture wasn't worth a zloty.

Review by bdwilner from the Internet Movie Database.