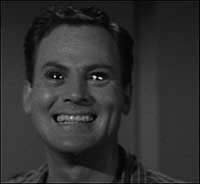 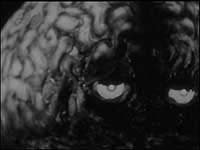 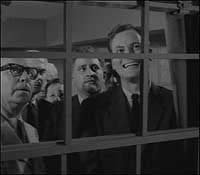 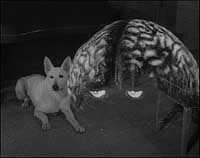 John Agar stars in this quintessential mix of '50s sci-fi themes. Tracking an object from space that disappears from the desert sky into a mountain; something's there. Steve (Agar) and colleague Dan (Robert Fuller) explore. In a cave, The radioactivity jumps.

And there it is--the evil brain from Arous (Gor)--that absorbs itself into the injured Steve. Returning, Steve necks with girlfriend Sally (Joyce Meadows). That's pretty spontaneous for him; he's different in other ways too. "I know you Steve, and I know when there's something wrong." He gets more aggressive; her dog attacks him. He's out of there. At home, the brain floats off: "who are you?" demands Steve. It seems that the "savage" human Sally is attractive to this alien. Anyway, the brain needs his body because he's a nuclear scientist.

When Sally's dad, John Fuller (Ken Teller), gets home, she tells him that Steve went nuts. John goes to see Steve to check him out. Obviously, the brain wrenches him whether he tries talking as good old Steve. "Don't you think we should do something?!" Sally tells John later. Her dad's oddly blase about it, though. But she thinks that if they go to the mountain, they'll find something out.

Ascending to the same spot as Steve and Dan, they find the mysterious cave. We know something's going to happen. There's the same flash of light...they see Dan's corpse. "Earthlings..." It's alien brain #2 (Val); he's after the criminal brain. John and Sally agree to meet the "thing" again the next night. Meanwhile, Steve is calling the local base commander. Seems that his brain wants to spy on the earthlings' nuclear test. Steve gets the usual Faustian bargain from the alien: your bodysoul for unlimited power. As arranged, the Val visits John and Sally.

Somewhat whimsically, it's decided that Val will inhabit the dog's body; it should be above suspicion around Steve. Seems that the aliens should have no trouble sensing each other's presence, but apparently not. Steve's up to no good: he drives out to a spot where he looks up at a passing plane, making it explode. Later, he takes Sally (and the dog) out on a drive. "That's our world out there, Sally, yours and mine!" And then he puts the moves on her again. He tells her about the A-bomb test--his "discovery" will overshadow that puny bomb.

Getting aggressive with her yet again, the dog growls at him. They go to the plane crash site. The Colonel (Henry Travis) is there; radiation is involved in the crash. "It could be the beginning of the end," Steve says melodramatically. Returning home, we see that Val tells them how Gor can be killed. Now the sheriff (Tim Graham) comes to talk to Steve about Dan's death. Dan's body shows the same burn marks as the victims of the plane crash. It seems that since Steve and Dan both coveted Sally, there's a mighty conventional motive for killing Dan.

No problem, as Steve (speaking for Gor), proudly admits to the murders of Dan and the airplane victims. The upshot is that the Sheriff gets toasted too. Ok, on to Washington D. C., and the investigation into the airplane crash. The conclusion is that the attack was from an extra-terrestrial source. Back home, Steve shows up for a bbq at the Fullers, bragging about the nuke test the next day. He promised an alarming "demonstration." He seems to think that he'll be needed in D. C. "all this power and money..." is exactly what she doesn't want to hear about.

It's hard to believe she wouldn't distance herself from her: he's been annoying, borish, not to mention abusive. At the nuclear test HQ the next day, Steve meets the general in charge. Although he's not invited to the top-level meeting, Steve's got his own agenda. He's in. So, watching a TV broadcast of the test site, he makes his own blast. They're astounded, naturally. One officer tries to shoot him, but that guy's immediately obliterated. Steve's demands: a meeting with reps from all the nuclear powers.

Immediate panic. If any country doesn't show, their capital will be obliterated. Absurdly, though, he's soon back to a scene of everyday bliss with Sally. But, she's clued in about how to destroy Gor. Well, the representatives of the Powers indeed show up for the big meeting. Uh, oh, another demonstration is in order. Scratch another airliner. Steve (Gor) demands all of the nuclear powers strategic assets. We're to build spaceships to retake Arous, his home planet.

The Earth's to be retained as a colony. Not so fast: Sally's sneaking around in the!ab, making notes on Gor's vulnerability. When Steve returns, Gor has to exit his body to keep his strength. Sally, who's been hiding, screams. The brain attacks her, but the 'real' Steve hacks at it with an ax. He eventually gets it in the weak spot, and kills it. The end.

This was very well-done; much better than expected. Agar's character is a classic tragic hero: reminiscent of Dracula for his seductive desire for power over women, as well as Faust or Prometheus earthly power (otherworldly too, in this case), if not a god-like immortality. For the most part (minus the inexplicable loyalty Sally continues to show for SteveGor), the plot retains an consistent inner believability. There's no wasted scenes; the pacing never lets up. Agar is the perfect ordinary guy turned mad scientist bus alien possession; only Ray Milland's Man With the X-Ray Eyes gives a comparable stare of evil power.

The outer world (the nuclear test business, subsequent big-shot meeting, and DC. Investigation) is blended in well with the basic GorSteve, Val and Sally plot. Except for the shots of the actual blast, there's no annoying stock footage, no intrusive narrator. The aliens themselves are admittedly a bit ludicrous; but by just making them brains, the simulation is simplified--we don't need a guy in a suit awkward monster.

The idea of a friendly alien, which could've been a silly ploy, is well thought-out; we learn the backstory while fleshing-out (with brain matter?) the main plot with a more mature theme. That is, unlike many films of this type, the aliens aren't completely evil and without motive. The Brain From Planet Arous takes the conventions of space-age sci-fi, and arranges them astutely, giving us an entertaining and familiar treat.