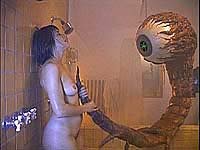 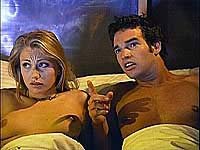 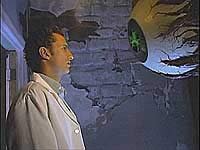 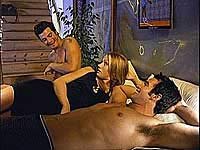 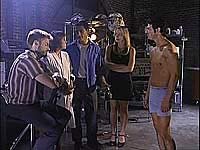 Here's another distressingly bad horrorskin flick directed yet again from the prolific and anonymous David DeCoteau (who is hiding under the alias "Richard Chasen" here). David seems to have excellent connections to video chain distributors and late-night cable outlets because his films are much easier to find than your average low-budget flicks. This is not necessarily a good thing.

THE KILLER EYE does offer a bare bones plot involving a scientist who accidentally summons up a giant mutant eyeball from the "8th dimension." Unfortunately the monster has little to do other than spy on swingin' sex, a girl taking a shower and two supposedly funny, muscle-bound, drugged out numbskulls who lay around in their underwear watching Linnea Quigley's shower scene in CREEPOZOIDS. The gorgeous Jacqueline Lovell (former adult actress Sara St. James) is the scientist's "neglected" girlfriend, who naturally has to seek sexual fulfillment elsewhere. She and a neighboring woman end up having a "close encounter" with the eye monster, that starts zapping people with a green energy beam during the last five minutes to justify the title. Otherwise it should have been called THE HORNY EYE.

So to sum it up, this film has a lame story, the usual assortment of untalented (but attractive) men and women, extreme time padding (slow-mo overdose, repeated shots) and a senseless script that was apparently made up as they went along.