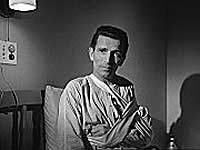 The Day the Earth Stood Still is often called one of the greatest science fiction films of all time. More truthfully, though, all it has really done is achieved cult status despite notable shortcomings.

First and foremost are the storytelling techniques. Classic dramatic techniques such as foreshadowing are virtually absent. Robert Wise's direction lacks any semblance of suspense. Instead, he uses the same plodding pace that doomed Star Trek - The Motion Picture 28 years later. The cinematography is unimaginative, even by the standards of the '50s. It often feels like nothing so much as a filmed stage play given the dominance of flat, medium shots. Repetitive scenes like group after group of pensive people clustered about radios weren't considered good film-making even back then, and it's downright boring today. Bernard Herrmann's theremin-laced score was peculiarly devoid of mood.

The main characters were thinly drawn, and some -- including Bobby and Tom -- disappear without a trace before the climax, leaving absolutely no closure. Michael Rennie did a passable job as Klaatu, but Patricia Neal simply could not redeem the cardboard cutout of Helen. Sam Jaffe is straight out of Central Casting as the wild-haired, pipe-smoking, Einsteinoid scientific genius. The military men couldn't have been any more stereotypical. The generals were all gung ho and the soldiers were too stupid to open fire on Gort when he first started disintegrating artillery and later when he escaped the block of plastic; they were simply cannon fodder. The wardrobe department must have had an easy time on this shoot. Every man is wearing either a suit and tie or a uniform, no matter if he's supping at home or working for the office. Maybe this was wishful thinking even in that era, that men should be nattily attired at all times. Today, it's merely preposterous.

The story had its share of major blunders. Some were based on outdated science, like the statement that Venus could support humanoid life. Others were just plain silly. Klaatu, having already been shot early in the movie, still tries to run from armed soldiers. He could freeze the Earth in its tracks, but has nothing for remote communication with Gort or his ship, needing instead a flashlight. It was never followed up on that since Klaatu was perfectly human, was there some relation between his race and humanity. And there was far too much exposition -- we're told too much rather than shown.

Should this film be remade? Certainly the effects could be improved. War of the Worlds and Forbidden Planet, released two and five years later, respectively, showcased what was the true state of the art for the '50s. Today's digital effects could easily add so much more to the story than Fred Sersen's optical effects of a half century ago, for instance a truly frightening Gort. But effects alone don't make a good movie, as the 1998 dud Godzilla proved.

A new multiracial cast would be an improvement on the sanitized and idealized whitebread cast that the pre-civil rights times necessitated. Not only should minorities be represented -- for Klaatu's warning affects them, too -- but so should women in roles greater than homemaker and secretary.

The script would have to be rewritten from the ground up, for the main premise is fatally flawed. Klaatu threatens the extinction of mankind -- indeed, of all life on Earth, including the innocent animals who have no knowledge of our sins nor power to stop them -- if any aggression were visited upon our interplanetary neighbors. The 'barbaric' leading societies of Earth had forsworn the use of genocide as a form of warfare decades before this movie was made. Even the thought of targeting unarmed civilians as retribution for aggression is morally repulsive to rational citizens of the modern world. Nuking Serbia for the actions of Slobodan Milosevic is unthinkable. How could a supposedly more advanced "civilization" justify such a sweeping atrocity? The concept of collateral damage is already falling out of favor with the American public. A contemporary script might have Klaatu realizing the error of his ways after being suitably chastised on his apparent lack of humanity, humility and compassion by the female lead. Never mind how our primitive weapons could have threatened their technologically superior civilizations. His single ship had the power to neutralize our entire planet and was impervious to any force the Army could muster. Gort himself was said to be able to singlehandedly reduce Earth to a smoking cinder. Surely at the first sign of attack, either could effortlessly dispose of a few pitiful nuclear missiles. Thereafter, it would have been child's play to interdict all future spaceflight until the human race matured or capitulated, especially when backed by the might of a fleet of ships and Gorts. All without the loss of a single life, human or otherwise. Compare it with Forbidden Planet, made only six years later. That, too, had the message that man was inherently flawed and could not be trusted with immense power. But it never took the heavyhanded approach of threatening total destruction. It just had a single genius who simply said man was not ready for the tremendous knowledge of the Krell. That is much more accurate and true to life. We aren't and may never be worthy of such power. But how realistic is it to turn us against each other, trying to keep any rogue nation or terrorists from inciting the wrath of Gort? Couldn't that run the risk of creating more conflict here on Earth just to protect Klaatu's people? If a group thinks themselves martyrs and believes they will be elevated to heaven after death anyway, how could you stop them from bringing death upon all of us, short of killing every last one of them?

The thinking man's science fiction movie? Hardly. For now, that honor falls to Contact, starring Jodie Foster, a much deeper look into humanity and the human condition.

Review by TVholic from the Internet Movie Database.