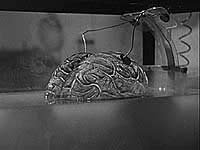 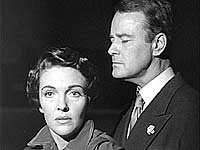 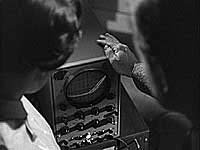 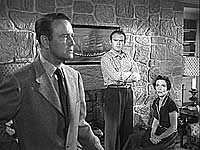 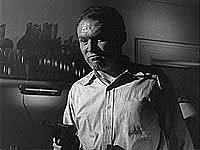 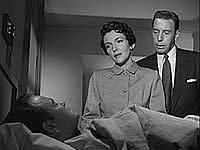 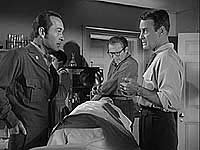 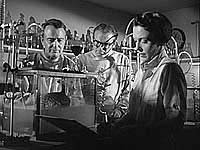 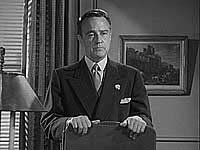 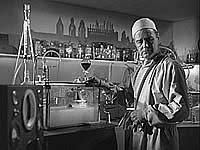 Lew Ayres had a long and distinguished career in motion pictures from the 1930s until his death in 1996. It takes in plenty of territory, such as his lead in the original ALL QUIET ON THE WESTERN FRONT to his alcoholic younger brother in HOLIDAY to his psychiatrist sleuth in THE DARK MIRROR to his doctor in JOHNNY BELINDA to his ignored Vice President in ADVISE AND CONSENT to his later television work on a Columbo episode and even in L.A. LAW (as a super-annuated but likable attorney). There was also some interesting (but acceptable) political controversy: he took his exposure to war's horrors in ALL QUIET quite seriously, and was a conscientious objector in World War II. But he actually still served in that war as an ambulance driver, so nobody accused him of shirking his duty or of cowardice. He never did achieve Oscar status, but then neither did his contemporaries Edward Arnold nor Greta Garbo.

One of the few times Ayres played a less than likable person was in this marvelous little science fiction film from the 1950s. Actually Ayres is portraying two personalities: First he is playing a typically good character, Dr. Patrick Cory. Doc Cory is working with his wifenurse Janice (Nancy Reagan - here Nancy Davis) and Dr. Frank Schratt (Gene Evans) on research into brain waves and keeping brain tissue alive. He's making great progress with monkeys and animal brains. But he realizes that he has yet to have any experience with human brain tissue. So he is fascinated when an accident occurs near his desert laboratoryhome. A private plane crashes killing the people on board. One is Warren H. Donavan, a multi-millionaire of questionable attitudes and business ethics. Because of his work with the local police department, Ayres is called in to the wreck site as a coroner. He writes up the death reports, but he notices that Donavan's brain case is in a good physical state despite the crash. He waits until the police leave, and (with Schratt's questioning assistance) he cuts out Donavan's brain and puts it into one of his specially designed tanks to be kept alive and measured for brain waves.

Gradually Ayres picks up his second role and personality. You see, he does not realize that Warren H. Donavan was a very forceful personality - indeed a very hateful one. Early on Ayres (as Dr. Cory) meets Donavan's son and daughter, neither of whom are totally sorry to see their tyrannical and evil father dead (he'd been threatening to disinherit both for not listening to his "advice" to them). This should have tipped him off. Gradually, as day follows day, Cory and Schratt see that the brain of Donavan is getting healthier under their care, and seems able to function in the apparatus. But Schratt and Janice Cory notice that the Doctor is not himself - he is rather sharp with them both, and he does not seem to notice he has acquired some negative characteristics of Donavan's. Actually, of course, the powerful brain of Donavan is slowly taking over the softer, gentler Cory's brain. So the second personality emerges, and for long stretches of this neat thriller Ayres is actually playing Warren Donavan, complete with Donavan's diet (he likes milk and steak three times a day), wardrobe (a specially designed pinstripe suit), and limp.

Donavan was having problems with the Federal Government at the time of his death: he was against paying any income taxes. I don't mean he lied and paid a minimum by playing fast and loose with the rules - he loathes the idea of income taxes. He has bribed a Washington IRS man (Tom Powers) to find legal roadblocks regarding a full scale investigation into his wealth. Donavan has also hidden a huge proportion of it (about $600,000 in 1950 dollars) in bank accounts under assumed names around California. Using the imprisoned Cory as his body, he takes this money out and starts assaulting the stock markets. His goal: to basically take over the American economy. How to do this: by having Cory and Schratt build better equipment to keep that mighty brain of his alive as long as possible. He does not plan to be stopped.

And he won't be. He is blackmailed by one clever reporter Herbie Yokum (Steve Brodie) who has half the story correct: Yokum saw (when taking photos of the autopsied bodies of the plane victims) that Dr. Cory had done something with the brain of Donavan, although he never reported it to the police. He does not realize, as he gloatingly shows the autopsy photos to an angry Cory, that he is not talking to Cory but to Donavan at that point (who is not pleased to see photos of his body cut up). So Donavan makes fast work of Yokum in a subsequent accident.

Eventually the brain also demonstrates it's willingness to injure anyone - Dr. Cory himself, Schratt, and even Janice. It is just by a sheer piece of luck or divine intervention at the end that the brain is finally stopped.

Science fiction films in the 1950s tended to confront the Cold War issues of American threatened by "alien" cultures or beings. But only in DONAVAN'S BRAIN was it the threat of uninhibited capitalism boosted by science that took central stage.