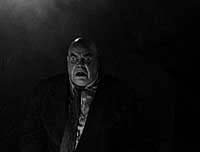 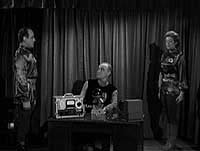 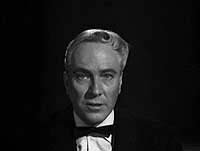 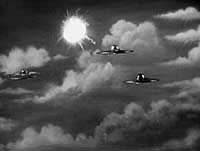 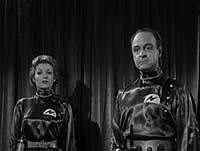 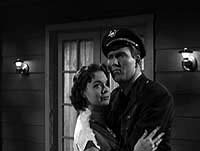 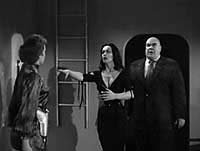 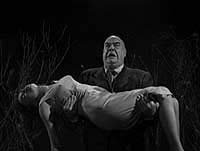 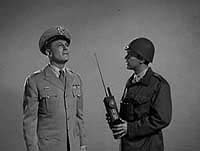 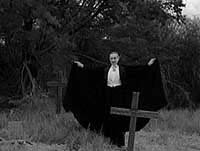 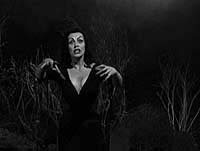 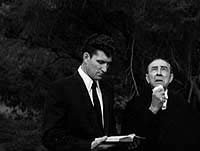 Frankly, I have no idea how to go about rating this. It should technically be given low marks because of the spectacular ineptitude with which it was made, but... but...

It's just too much fun!

Every absurdity found in the film seems to somehow paradoxically work to its benefit -' the stupefying dialogue, the model flying saucers on strings, the stock footage which stands out because it oftentimes seems of better quality than other parts of the motion picture. Ed Wood's magnum opus may be brimming with dumbfounding incompetence, but it is too entertaining, too much of a zany delight, for me to rank it down with truly unbearable atrocities of cinema.

The plot of "Plan 9" deals with the ninth plan of an apparently highly advanced alien race (though if they were so advanced, you'd think they'd have been able to succeed the first time around) to conquer Earth by resurrecting the dead from cemeteries. Wait, did I say conquer? I'm not sure. The aliens' motives alternate throughout. Sometimes it seems as though they want to take control of the planet. Other times it appears they just want recognition from the human population. And in the end, the aliens warn their captives -' an army colonel, police detective, and hotheaded airplane pilot Jeff Trent -' against the dangers of the 'Solaranite bomb' and act as if they are taking part in a crude and silly mimicry of "The Day the Earth Stood Still". Have they come to Earth to give Earthlings a message, a la Klaatu? Maybe... I guess... Except it is clear that the aliens intend to kill their human captives after telling them about Solaranite. So there is really no point in telling them much of anything, is there? I mean, if these humans are just going to be bumped off in a few minutes? ...Whatever. To seek for logic in the plot of "Plan 9" is futile, but it is undeniably amusing to try and to, of course, fail.

Along with the idiotic storyline, the performances help propel "Plan 9" to its status of legendary badness. They range from humorously wooden to being so outrageously over the top and campy that they are a joy to behold. In the first category are the acting jobs from the people in roles like the airline stewardess who pops into Jeff Trent's shower-curtained cockpit from time to time or Trent's bland and pillow-cuddling wife. At one point, Mrs. Trent states to her husband, "The saucers are up there. The graveyard is out there. But I'll be locked up in there." The total lack of emotion in her voice has to be heard to be appreciated. The second category contains many of the (few) actors playing aliens, like Dudley Manlove as Eros and John 'Bunny' Breckenridge as the Ruler. Manlove is probably the best (?) thing about the film. His obnoxiously authoritative voice and outrageous facial contortions make for an unforgettable character -' so pompously sure of his own superiority, yet so ludicrously imbecilic. One of his best moments is when his female comrade, Tanna, attempts to speak out to the Earth people. As she does, Manlove silently fumes with more and more increasing intensity, at last roaring, "THAT'S ENOUGH!" and flinging her roughly aside. It's like he's a cross between a sexist tyrant and a petulant kid! (After this, Eros haughtily informs Trent and the others, "In my land, women are for advancing the race, not for fighting man's battles!" Is that so? Well, why is this woman in uniform and in her planet's military, then?) Likewise, John Breckenridge's droll, eyeliner-wearing alien Ruler can almost always spark a snicker, especially when he is shown rolling his eyes exasperatedly at Eros. He seems as aware of the character's ridiculous arrogance and stupidity as anyone in the audience.

Ah, "Plan 9"! Where else could one expect to find footage of Bela Lugosi outside of a house, sauntering to an off-screen demise as the shot freezes with Lugosi's shadow still in view and lame sound effects suggest a car crash? Where else could flying saucers be said to be shaped like cigars? Where else but in the wacky world of Edward D. Wood Jr. could narration be delivered by the loud and lilting voice of quack psychic Criswell? Where else could a viewer experience such grandly hilarious dialogue as, "YOU SEE? YOU SEE? YOUR STUPID MINDS! STUPID! STUPID!"?

See it. It really is one of the best of the worst.

Review by TheHighVoltageMessiah from the Internet Movie Database.