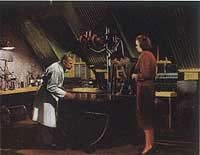 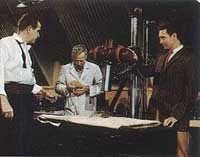 Paul Krenner, a would-be criminal kingpin, hooks up with a safe-cracker named Joey Faust. Through extortion and force, Krenner has coerced a scientist to develop a process of making animals and people transparent. Krenner's idea is to use this discovery to create and army of invisible men to do his bidding. His more immediate plan, though, is to make Faust invisible so he might steal the radium needed to continue the experiments. But Faust has different ideas about how to use his invisibility -' most of which involve bank robbery.

First I'll mention the relatively small list of positives I found in The Amazing Transparent Man. I think the basic idea behind the movie is interesting. The notion of an invisible master criminal who could literally rob a bank in broad daylight presents some interesting possibilities. The other positive element of the movie is the film's score. The central musical theme that gets repeated throughout The Amazing Transparent Man is successful in creating the desired ominous atmosphere.

Unfortunately, however, the list of negatives is huge. While the movie may present some interesting plot ideas, the execution leaves a lot to be desired. In general, director Edgar G. Ulmer was as good as any director at working with a low budget to make interesting and entertaining movies. That's not the case here. The Amazing Transparent Man never overcomes the limitations of its low budget. Bad acting, a poor script, ridiculous dialogue, ambiguous character motivation, and uninteresting sets are just he beginning of the many problems readily apparent in the movie. Honestly, I could go on and on, but what's the point? This is low-rent film-making at its worst.