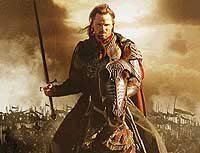 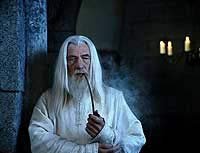 The problems of this film start right at the beginning, when Peter Jackson establishes Smeagol's murderous nature as a major theme in the film. In a flashback we witness how one look at The One Ring turns Smeagol into a cold-blooded murderer. Well, after Frodo carries the thing for 13 months he just suffers from minor exhaustion. The mission to dramatise the power of the ring has failed, and we're only in the first minute.

I can't think of one good reason why Return of the King can't start with Shelob's Lair. Instead of proceeding the action where we left off at the end of The Two Towers, which was with Gollum sharing his evil plans with the audience, we get Gollum's entire development all over again. There's numerous fights between Sam and Frodo over whether or not to trust Gollum (I've lost count), there's another GollumSmeagol argument where his evil intentions are laid bare another time (half a dozen now), and there's another instance where Gollum has to save Frodo by pulling him back from evil (I think it's the fourth). Maybe Peter Jackson should learn what 'the power of suggestion' means. We've seen this all before, it adds no dramatic value whatsoever. When Frodo finally faces Shelob after 110 minutes, well, that's pretty much where we were supposed to be at the beginning of Return of the King.

Peter Jackson proved unwilling to accept that Gollum is supposed to be a supporting character who tags along with Frodo and Sam, a guide with a hidden agenda. Instead, Peter Jackson turns him into a walking cliché, a villain who tells the audience exactly what he's going to do on every occasion. It's striking to see how this storyline falters when Gollum disappears. Elijah Wood and Sean Astin struggle with cheesy lines to convince the audience how much trouble they have getting the ring up Mount Doom. Gollum trying to drive the hobbits apart is far more convincingly played and written than anything between Frodo and Sam. Peter Jackson doesn't make Sam's decision to leave Frodo at the whims of Gollum very acceptable. He knows Gollum poisoned him against Frodo, but what's even worse; He knows Gollum will try to kill Frodo so he can take the Ring.

The Cirith Ungol sequence is the part where Jackson's storytelling fails the most, and that's saying something. With all the repetition in Gollum's actions, Jackson discards a major possibility for drama; Sam trying to find Frodo. Within 150 seconds, Sam is able to get to Cirith Ungol, climb the tower, kill three Orcs, deliver the lamest lines imaginable (This is for Frodo! The Shire! My old gaffer!), find Frodo, give Frodo back his ring, descend Cirith Ungol and walk to the point where they can witness Mount Doom dressed up as Orcs. The way Peter Jackson rushes this memorable sequence from the book is unforgivable.

Peter Jackson also struggles to get the story going in this segment, as he doesn't seem to know how to separate his characters after they just reunited. Cue: The AragornGandalf sequence starts with one big accumulation of plot-holes.

For some reason, Theoden and his huge Rohirrim army can't join Gandalf when he rides to Minas Tirith to warn Gondor and help their defences. Peter Jackson left the impression in The Two Towers that Theoden couldn't count on any more men than we saw during Helm's Deep, Theoden King stood alone. In Return of the King, this has changed, apparently. When Gandalf and Pippin reach Minas Tirith, Pippin has to go through all kinds of troubles to light a beacon. A chain reaction is set, and the signal reaches Edoras. Aragorn, of course, is the first one to see it, though nothing stops him from commencing his little quest. Anyway, now Theoden and his army can ride to Gondor. Let's hope they'll make it in time.

On their way to Gondor, Aragorn happens to stumble upon the Paths of the Dead without any build-up (except Gandalf's vague little remark). These Paths are inhabited by a ghost army that's capable of wiping out Sauron's army in a matter of minutes. That in itself, is remarkable to say the least. A sword called Narsil allows complete control over this army, Aragorn, of course, doesn't have it. Out of nowhere, Elrond shows up to bring Aragorn a gift. It's Narsil. What a coincidence.

The most inconsistent character of the film is Denethor. He's angry at Faramir for not defending Osgiliath, yet he hasn't prepared any Gondorian army for battle himself. He willingly sends Faramir into certain death, yet when he actually dies he's obviously upset. He doesn't want Rohan to come to Gondor because Aragorn would take over the throne, yet when he witnesses Sauron's army he feels betrayed by Rohan. This man hasn't made up his mind about, well, anything. Fortunately, when the battle for Minas Tirith is about to begin, Gandalf punches Denethor with his staff and immediately takes over command over the Gondorian defence system. Which has been prepared, apparently. Instead, we get an endless collection of shots that are either wide miniature shots where you can't see our hero's actions, or shaky set footage where nothing is ever achieved. Gandalf repeatedly barks orders at no-one in particular, yet they're always followed. There's never a sense that the Gondorians realise what's outside these walls, since nothing that happens inside them is ever consistent with the numbers suggested by Peter Jackson. This is where the huge wide-shots and the recorded footage cancel each other out. We've got 200,000 soldiers, Trolls, wargs, battering rams and catapults. Once the wall is breached, there seems to be nothing Gondor can do to stop this force. Yet Minas Tirith stands at the end of the battle, despite the fact that none of Gandalf and his army's actions made this plausible. There's another major editing goof to be found here; Denethor is about to set himself and Faramir on fire, Pippin is pushed out of the room. A hobbit situated on the highest level of Minas Tirith has to find Gandalf, situated on the first level. Apparently, Pippin needs Gandalf to help him prevent Faramir from being burned alive. Are none of the Gondorians willing to help him save their hero? Anyway, I'd say it would take him hours to get down, but when he finds Gandalf and they get back at the top, Denethor has been a gentlemen to wait for these two so they can stop him. After the little piece of CGI flame jumps off the pyre (a.k.a. Denethor's suicide), Gandalf doesn't need to command Gondor's soldiers anymore. He sits down and gives a life-affirming speech to Pippin, even though a troll tries to smash in the gate right next to him. The scene with Gandalf isn't concluded, nor is the battle for Minas Tirith. Peter Jackson thinks his audience cares more about his computer-generated battles than his main characters, Gandalf and Pippin. The next time we meet Gandalf, he's found Aragorn. The next time we see Pippin, he's found Merry. How convenient.

The Battle at Pellenor Fields begins. Every wide-shot with the Rohirrim army and the Army of the Dead looks like a computer game. Like the Nazgul being the highlight of the previous 'battle', the Mumakil manage to steal the show in the field. Once again, the massive wide-shots seem completely disconnected from what's happening in the close-ups.

The green fog arrives and this part of the story is over. Apparently, only our heroes survived the battle, because there's not a Gondorian or Rohirrim soldier in sight. Take note; during a 70 minute battle scene, Peter Jackson hasn't managed to create one instance where it's clear whether the good guys are winning or losing. Another major goof; when Aragorn is crowned he tells his people it's time to rebuild the city. Yet the previous wide-shot revealed Minas Tirith to be completely intact. The battle has had absolutely no consequence.

After the battle for Pellenor Fields is 'concluded', there's not one instance for either the Frodo storyline or the Aragorn one where the dialogue isn't needlessly explaining the plot or the character's emotions. Take Legolas' "A diversion...", Gimli's "Let him stay there, let him rot. Why should we care..." or Gandalf's "Sauron will expect a trap. He will not take the bait...". The 'Last Debate' sequence is a new low for Peter 'Mr. Exposition' Jackson, Aragorn's 'rousing' speech at the Black Gate doesn't help matters. The Frodo storyline is even worse. Again, Peter Jackson only reserves about 2 minutes for one of the most memorable parts of the book, the walk over Gorgoroth. He uses this time to turn Frodo from a relatively fresh hobbit into a mumbling wreck, without success. Dialogue like "No, Sam. I can't recall the taste of food, nor the sound of water, nor the touch of grass. I'm naked in the dark. There's nothing--no veil between me and the wheel of fire. I can see him with my waking eyes." or "I can't carry it for you frodo, but I can carry you!!!" is laughable when Frodo proves able to run into Mount Doom the next minute.

It's a shame Peter Jackson intercuts this sequence with the fight in front of the Black Gate. The Rohirrim and Gondorian soldiers magically reappeared. Tolkien had trust in his readers' ability to connect two storylines in their heads. Peter Jackson doesn't hold his audience in such high esteem. He needs to show how Sauron seeing Aragorn allows Frodo a clear passage, and how Aragorn is saved from an evil troll by the ring's destruction.

Although the dialogue during the climactic scenes was horrendous, there doesn't seem to be much written for the endings at all. Frodo is lying in bed when all the members of the Fellowship walk in. Smiling, laughing and kissing ensues. Slow-motion and a serene look can't disguise that this scene is hopelessly sentimental. The same goes Aragorn's coronation and the goodbye scene at the Grey havens. When Sam finally closes the door of his Hobbiton residence, the trilogy ends with mixed emotions.

Review by Vicenzo-V from the Internet Movie Database.