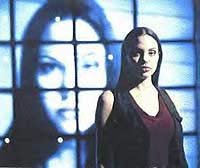 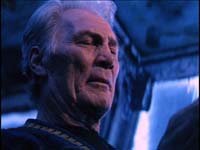 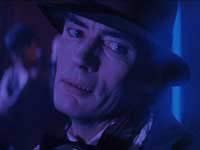 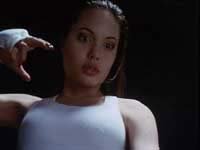 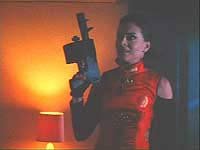 Not quite as bad as the rating suggests and has enough to make it watchable, but at the end of the day it just felt like a waste of potential. I forgive that it has little in common with the original Cyborg, the cheesiness and (sort of) the low budget, but not so much that it didn't do enough with its intriguing concept or let its talented cast properly shine.

The best asset for me about Cyborg 2 was the performance of Jack Palance, most of his screen time is voice only but that does not once stop Palance from still being a blast as Mercy, one of the few in the cast who actually sounded like he was having fun. Who can't help love his lines either, on the most part the script was not that great at all but the outrageous surrealism of Palance's dialogue and the way he delivered it(literally just going for it no matter how little sense it made) made for enormous entertainment. Billy Drago is a sneeringly over-the-top but also chilling villain and Allen Garfield brings a little wit to his role.

Cyborg 2 starts off promisingly, showing some imaginative visuals and some intriguing story set-up. Some of the futuristic special effects are nicely done too, there is a good attempt at a dystopian futuristic atmosphere that can come over effectively and the photography succeeds in being both dream-like and nightmarish.

However, with the exception of Mercy's lines the script is rather weak, a lot of it reminiscent of gibberish that was in serious need of a proof-read or two. Some of it only succeeds in confusing the story even further and the characters are literally less-than-one-dimensional stereotypes, Mercy was the only character that actually seemed like the writers cared about halfway developing and even he was severely underdeveloped. The story concept-wise is intriguing, but while effort was made into giving the film atmosphere not as much attention was paid giving it momentum and such. Cyborg 2 drags a lot and changes tone shifts and plot points so frequently the story felt tonally weird and structurally choppy, which just didn't feel right. The action scenes are uneven, some have verve and fun but too many others are sloppily choreographed and lazily performed.

While Cyborg 2 is not a amateurish looking film, there are instances where low budget is obvious, the sets are dreary and generally unimaginative, some editing lacks polish and the film is frequently lit far too darkly. The synthesised music score just felt at odds with the film, it sounded cheap and like it would belong more at home in a film from the late 70s-early 80s, plus to me it lacked energy. While it's true that Cyborg 2 has little to do with the first Cyborg it does incorporate a few flashbacks to tie them together, the trouble was they were rather brief and at the end there was not much need for them to be there. It was completely understandable why they did it and it was laudable, but with the way the story was written here their inclusion didn't add very much. Palance, Drago and to a lesser extent Garfield were fun, but Angelina Jolie's(in her lead role debut) acting inexperience shows no matter the effort in as sparely written a role she could have possibly gotten and Elias Koteas is even blander than his very underwritten hero character, while the rest of the cast were average or below.

Overall, watchable but mediocre. Notable for it being Jolie's lead actress debut and those fond of Palance and Drago will find pleasure. But at the end of the day, with not enough done with the story and the cast not having enough to shine, it felt like a waste of potential.

Review by TheLittleSongbird from the Internet Movie Database.