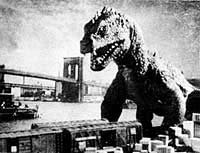 WARNING SOME SPOILERS The original Lost World and King Kong introduced movie audiences to outsized creatures invading civilization, though only through the plot device of men capturing the animals in their native habitat and bringing 'em back alive. The Beast From 20,000 Fathoms was different, as it was the first one about an outsized visitor that came-a-tromping of its own free will, motivated by instinct to return to its ancient habitat, tied in with the then new concept of the creature being awakened by a nuclear explosion.

I'm probably in the minority, but this is my favorite Ray Harryhausen movie. Yes, Jason and the Argonauts had the incredible skeleton swordfight. Clash of the Titans the atmospheric Medusa sequence. Twenty Million Miles to Earth and 7th Voyage of Sinbad had his most original (and with the Ymir of Twenty Million his most sympathetic) creations. Even Valley of Gwangi inspired me to a livelong love of dinosaurs, but I've enjoyed watching Beast more than any of Ray's other films. It didn't really occur to me why until recently, but after seeing the film again (thank you DVD) I figured it out.

Working on a film with a budget less than half that of King Kong made 20 years earlier, for his first solo feature Harryhausen did an admirable job. However, unlike nearly all of Harryhausen's later films (where the budgets, though still small, gradually increased over time) he was hired by the producers to animate the stop-motion Rhedosaurus working in collaboration with director Eugene Lourie on an almost equal basis, while in all of his later films it was Harryhausen who exerted most of the creative control. Fortunately, Lourie's creative input gave much of the live action scenes a dark, film noir look, while Harryhausen's fictional dinosaur likewise is underlit through most of its early appearances. Another aspect of Beast that I like is that much of the film took place in Manhattan, my own old stomping grounds. I think I can identify with the film better for that reason, as opposed to Harryhausen's more mythological fantasies where the locales are exotic. It was really a shock when I went down to Coney Island a few years ago and saw the weed-entangled remains of the roller coaster where the finale was supposed to have taken place. (It has since been torn down-by that other monster, land development!- though the actual shooting location for the roller coaster was in CA)

I also liked the originality of the script. Though based in part upon Ray Bradbury's short story, and is now considered trite, it was the inspiration for not only Harryhausen's next feature, It Came From Beneath the Sea, but also the giant ants in Them! and the host of 50's atomic horrors that followed. Even the mighty Godzilla and his rubber-suited buddies from Japan used Beast for inspiration.

The score by David Buttloph I consider the best of all of Harryhausen's BW features (if you think I'm exaggerating, compare it to the stock Columbia score used in It Came From Beneath the Sea and Earth vs. the Flying Saucers!) Buttloph's powerful score definitely added a bigger budget feel to the film, especially in the fiery finale at the roller coaster. To a lesser extent, the acting, particularly by Cecil Kellaway as the likable Dr. Ellson and Kenneth Tobey as the cynical yet stalwart Colonel Evans provide interesting moments between the monster's appearances, and their characterizations are as rounded as one can get for a Harryhausen film.

As for the Rhedosaurus, from the moment it first appears in the blizzard to its demise on the beaches of Coney Island, one has a real sense of awe of the monster. Its attack upon the lighthouse is one of the most effective stop-motion sequences ever filmed. Harryhausen, taking a cue from Lourie, has his model rise from the surf in silhouette, not only providing a nice atmosphere of menace, but also as a practical way to hide some technical flaws in the Dynamation process he was developing at the time. Once the beast has come ashore in Manhattan, Harryhausen's lighting of his model blends nicely with the prefilmed background footage Lourie had shot on location in New York. Along with the deep rumbling roar of the monster, Buttloph's score adds a real dimension of primal menace and power to the animated model, and unlike Tri-Star's Godzilla, this monster is seen as a real threat, not an inconvenience. As an added twist, the Rhedosaur is revealed to be a carrier of an ancient disease, fatal to humans, yet another reason the creature has to be destroyed. And yes, who can forget the NY cop who ends up as a little blue snack? To quote Dr. Ellson, 'It'd require quite an appetite, don't you think?'

The bottom line-Beast is one of the best of 50's science fiction, and definitely worth a look at least once if you're a fan of sci-fi and fantasy films.

Review by ramaken33 from the Internet Movie Database.