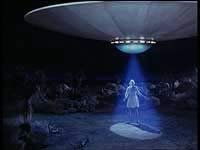 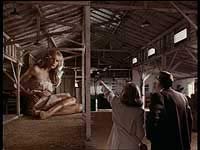 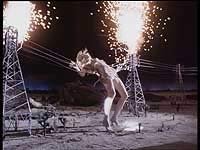 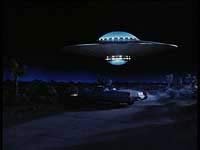 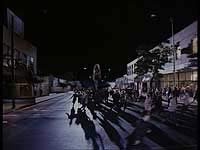 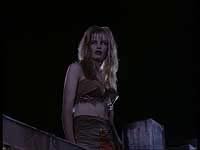 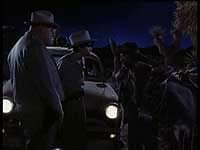 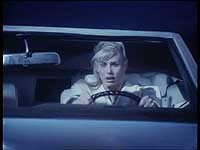 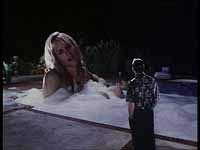 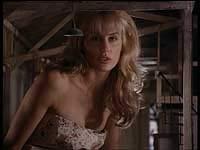 A friend of mine once said that "a happy wife may have the best husband, but more often makes the best of the husband she has". Nancy Archer, the main character in this film, is another wife struggling to make the best of a bad job. She's just not a happy one. Her husband, Harry, is frequently unfaithful to her, but she tries hard to convince herself that she still loves him and that, in spite of appearances, he really still loves her. Nancy's problems don't end with Harry. She is an heiress who has inherited considerable wealth from her mother, but her father, Hamilton Cobb, a ruthless and ambitious property speculator, bullies her into allowing him to use the money to fund his business ventures. Nancy's one source of comfort is her psychiatrist, Dr. Cushing, whom she sees frequently.

And then, following an encounter with a UFO one night, Nancy finds herself growing to gigantic size, not stopping until she is 50 feet tall. She realises that her new height, and corresponding strength, have given her the opportunity to get even with her father and Harry.

When I recently reviewed "Roxanne", also starring Daryl Hannah, I pointed out that, although she was regarded as one of Hollywood's rising stars of the eighties, her career seemed to go into something of a decline and few of her films from this century, apart from the two "Kill Bill" episodes, have aroused much attention. Part of the reason may have been Hollywood has had something of a surplus of lookalike leggy blondes in the last two or three decades (Kim Basinger, Uma Thurman, Cameron Diaz, Gwyneth Paltrow, etc.), but another part of the reason may have been too many films like this one.

Actually, Daryl's performance here is not a particularly bad one, and she makes Nancy into a rather sweet and lovable heroine. My problem was that I just couldn't see why the film was made in the first place. The original 1958 version of "Attack of the 50 Foot Woman" is frequently described as a "cult movie". Now this expression sometimes means "unjustly neglected masterpiece", or at least "a film regarded by its cultists, if by nobody else, as an unjustly neglected masterpiece", but in the context of low-budget fifties sci-fi it generally means "complete rubbish which some people enjoy watching for the pleasure of sniggering at how bad it is". Indeed, "Attack of the 50 Foot Woman" is sometimes listed among the "worst films ever made", although in my opinion it cannot really compete with the true classics of that particular genre such as "Plan 9 from Outer Space". It's bad, certainly, but not quite that bad.

So why on earth would anyone want to remake it? Possibly because of its very reputation for badness. After all, devotees of cult movies of this variety frequently claim to watch them in a spirit of postmodern ironic detachment, and so if accused of making a bad movie the film-makers will always have a retort handy. "But it's not a bad movie! It's an ironic movie! You just don't get postmodernism, do you?"

Unfortunately, to paraphrase Edith Cavell, irony is not enough. The 1993 film does not really add anything to its less-than-illustrious predecessor. Certainly, the art of special effects had advanced during the intervening three and a half decades, so this aspect of the film is certainly better than in the original, but that's only "better" in the sense that "mediocre" is better than "embarrassingly bad". The remake's one indisputably new feature is that it adds a heavy-handed feminist message along the lines of "men are all bastards". It is notable that at the end Nancy takes revenge in full on her husband and father while Harry's mistress Honey is forgiven. (Yeah, she might have played her part in breaking up Nancy's marriage, but as a woman she is automatically counted as part of the "sisterhood").

Part of the incongruity of the original was the way in which it combined a domestic melodrama about a cheating husband with a science-fiction theme and did so in a completely straight-laced, humourless way. People may have laughed at the original; they didn't laugh with it. One way of remaking it, therefore, would have been to do so as a comedy which attempted to get laughs out of this incongruity, but the remake never achieves this. It may have been made in an ironic, tongue-in-cheek spirit, but "tongue-in-cheek" does not always equate to "funny".