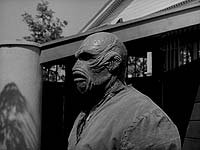 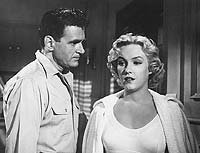 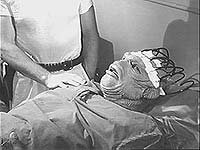 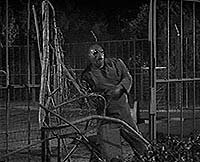 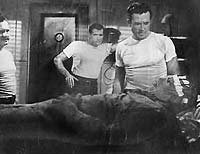 Reading through the user reviews for this Universal sequel, I am legitimately surprised at how many raves I'm seeing and comments that it's the best of the series. To each their own, but I just cannot agree.

The original CREATURE film is an absolute classic and one of the best horror films of the black-and-white era. This movie improves, slightly, from the subpar second movie REVENGE OF THE CREATURE, but still comes up sorely lacking.

Once again, we begin with some scientists who just can't leave the poor Gill Man alone. I mentioned in my review of REVENGE how sympathetic I think this creature is and it continues here as the monster really just wants to be left alone, but man just refuses to let that happen. The first half of the movie takes place in the Everglades as the expedition attempts to track down the monster to capture it for study. There is nothing new to offer here. We meet a new group of scientists and a new leading lady, only this time around there isn't a likable character in the entire bunch. You spend most of the movie wishing the monster would kill these jerks and put us all out of our misery. We get the requisite underwater scenes and again there is nothing new offered, as most of the monster footage is recycled from the original movie.

They track the monster up a stream at which point we do get one of the better scenes from the Creature trilogy, as he attacks the scientists on their boat. The tension is short-lived however, as the monster is shot twice and set ablaze, leading to his capture.

At this point, the movie really grinds to a halt. Let's start with the cardinal sin committed here. This is the one of the greatest monster makeups ever created in horror history. Why, in the Black Lagoon, would you change that makeup? Why would take this magnificent monster and turn it into a fish-like wrestler? It's inexcusable to me. The movie explains these changes with some of the worst science you'll ever hear as the monster is capable of evolving instantly into something new? I might be willing to buy the lungs theory, but to have a second skin underneath the scales that's just waiting to come out? I know these 50s sci-fi movies require some suspension of belief, but they're really pushing it here.

To further slow things down, most of the second half revolves around everyone on the boat trying to sleep with the only woman present and the jealousy it cases in her lunatic husband. None of it is interesting and it's made even worse by melodramatic overacting.

We finally get to the lead doctor's home, where the creature is put into a pen with some goats (for no other explainable reason than they will be needed to further the plot in a minute). He kills a mountain lion threatening the goats and, for some reason, this is not seen as protective, but as proof that the creature will always be a violent menace. The climax comes when the lunatic, jealous doctor finally kills one of the men who have tried to nail his wife. For some reason, this enrages the creature (yes, suddenly the monster who has killed men for 3 movies is now upset at violence), who goes on a rampage, leading to a depressing ending.

To me, what makes the original work so well is an exotic jungle setting, great underwater photography, a magnificent creature design and a female lead with a brain. All of these could have been explored in much more depth with the sequels, particularly where did this creature come from and are there others. Instead, by now, he's removed from the jungle, no longer underwater, the creature design is stripped down to generic proportions and our female lead is completely unlikable. It's a good thing Universal let it die with this one.

Review by TheRedDeath30 from the Internet Movie Database.

May 7 2016, 15:00
Pedestrian, rather static and unimaginative.
Additional Off-Site Reviews: