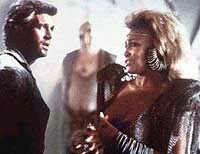 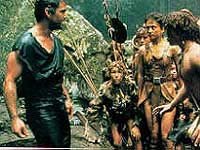 It has become a commonplace of film criticism that sequels are never as good as the original films and that, the more sequels a film spawns, the worse they become. There are, of course, exceptions to this sweeping statement, and I have always felt that the "Mad Max" franchise is one of them, the original "Mad Max" being in my view the weakest instalment in the trilogy and the third episode, "Mad Max Beyond Thunderdome", the strongest. (There were, apparently, plans to make a fourth episode, turning the trilogy into a tetralogy, but these came to nothing).

Like the second instalment, "Beyond Thunderdome" is set in a post-apocalyptic Australian desert. (The first episode was filmed in an agricultural region of Victoria and made no mention of a nuclear apocalypse). Max stumbles upon the nearest thing to civilisation surviving in this wilderness, the dystopian community of Bartertown. As its name suggests, Bartertown is a specifically capitalist dystopia. The town exists principally for trade, and its most sacred rule is that no contract can be broken, for any reason. Those who evade their contractual obligations are subject to severe punishment. ("Bust a deal, face the wheel.") Disputes are settled by fights to the death in an arena known as the "Thunderdome" (hence the title of the film).

Bartertown is ruled by a ruthless female dictator named Aunty Entity, but her leadership is being challenged by "Master", the diminutive but highly intelligent technician who runs the city's sole power supply, a methane refinery, fuelled by pig dung. (Exactly how a barren desert manages to produce enough food to feed so many pigs is never explained, but this was clearly not intended to be a realistic film. The idea of an economy based upon faeces was presumably intended to be a satirical comment on capitalism). Max gets caught up in Auntie's political machinations against Master, and ends up being exiled from the city when he reneges upon a deal to kill Blaster, Master's powerfully-built but simple-minded bodyguard, whom he has defeated in a Thunderdome duel.

Wandering through the empty desert, Max comes across a tribal community of children, the survivors of a plane crash, living in an oasis. They believe him to be "Captain Walker", the pilot of the downed airliner, who has come to return them to civilisation, or "Tomorrow-morrow Land" as they call it. (This part of the film clearly shows the influence both of William Golding's "Lord of the Flies" and of Barrie's Peter Pan, with its "Lost Boys" and "Never Never Land".) The rest of the film chronicles Max's adventures with the children and his return to Bartertown.

In 1978, when the first "Mad Max" film came out, Mel Gibson was a virtually unknown Australian actor; by 1985 he had become internationally known, having appeared in British and American movies like "The Bounty" and "Mrs Soffel". He was also a better actor in 1985 than he had been in 1978, although perhaps not quite as good as he was to become in the nineties in films like "Hamlet" and "The Man without a Face". Tina Turner makes a splendidly sexy villainess as Auntie, in a performance which made me wonder why her ventures into acting have been so few. (I also wondered if the name "Captain Walker" was borrowed from another film in which she appeared, "Tommy").

What makes the film better than its predecessors, however, is not so much its standards of acting as the fact that it possesses something which is vital to fantasy films but in which they (especially the first instalment) were deficient, namely imagination. This imagination is both visual and verbal. The film's visual imagination is shown in the early scenes, set in the creaking, ramshackle dystopia of Bartertown. Its verbal imagination is shown in the second part of the film, while Max is living among the children. The children have developed their own quasi-religious set of beliefs, centred upon the legend of Captain Walker and Tomorrow-morrow Land, and recite their mythologies in ceremonies known as "tells". The language used for this purpose is not correct standard English- it contains plenty of what we would consider errors of grammar or vocabulary- yet it has a strangely formal, ritualistic, incantatory quality.

"Mad Max Beyond Thunderdome" is not a great film; the two halves do not hang together particularly well, and there are a number of plot holes and illogicalities. Nevertheless, its imaginative style of story-telling make it a watchable example of post-apocalyptic film-making, comparable to something like "The Omega Man".