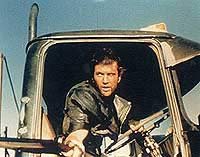 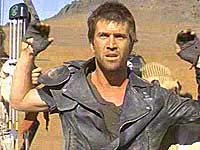 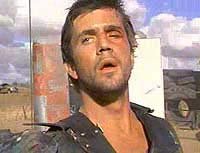 Often seen as a classic of its genre (whether it's action, post-apocalyptic, or "neo-western"), The Road Warrior has only aged moderately well over the last twenty-plus years. In fact, despite a pretty faithful cult following and a starring role from Mel Gibson, I don't think this movie has or ever will be widely embraced by the mainstream, and time certainly won't be doing it any favors. But this was the 80's, probably the decade I'm most nostalgic towards (either that or the mid-90's), so I can at least view The Road Warrior as an effective time capsule for what passed for escapist film-making back then, basically a lot of blood, rusty cars, double-barreled shotguns, and an armored-up eighteen-wheeler that does a whole lot of smashing. Yeah, I miss the 80's.

The Road Warrior is the follow-up to the low-budget revenge piece Mad Max. Set presumably a few years later, civilization around the world has apparently collapsed due to decreasing gasoline production and the resulting world war. Max Rockatansky (Mel Gibson), still driving aimlessly in the middle of nowhere, spends his time getting into chases and scavenging whatever gasoline he can get his hands on. With a little information obtained from a gyropilot (don't ask), Max discovers a fuel refinery that's being besieged by a gang of marauders. Using the situation to his advantage, Max offers to provide them with a means of transporting the gasoline in exchange for a few gallons of the fuel. The group accepts his offer, but complications arise that get Max further involved than he'd anticipated.

Never a great movie to start with, The Road Warrior is distinguished more by its interminably slow pace than anything else. The worst part is that all the slow moments aren't devoted to the usual details that make an action film great, namely character development, plot, smart dialogue, etc. There are actually a number of long, wordless stretches in the film in which the protagonist does little more than observe a hostile situation or merely just walks around from one arid destination to another. Max might have been the film's most potentially interesting character, but writerdirector George Miller is perfectly content with letting Gibson do nothing more than scowl, wield a gun, and occasionally drive his (quite dusty-looking) car. It's fair to say this may have been the simplest approach given the premise, but it's certainly not the most enthralling one.

The group Max finds himself defending is considerably less interesting, a slightly disorganized band living in a cleverly constructed compound whose occupants have somehow managed to maintain their sanity amidst the chaos. The group lacks the strong sense of camaraderie that's needed to sustain life in such a primeval setting (though there is sort of an unspoken, mutual understanding among them). A couple of heated arguments between the leaders aside, the "tribe" doesn't really do much other than serve as fodder for the car chases.

The villains are a little more interesting, but they're given the short shrift. Two particular standouts: the hockey mask-wearing Humungus, who has a distinctively gravelly voice and a pretty twisted sense of leadership (he literally leashes up one of his men for disobedience). And as Brian Wright of Cavalcade of Schlock already pointed out, there's a "you have to see it to believe it" scene where he's waving his arms around, looking like he's "composing" a score while a number of good guys are being tortured. The other standout is Vernon Wells' Wez, and if you're at all familiar with Wells' work in Commando, you know he just makes a great over-the-top villain. Unfortunately, the other villains aren't the slightest bit distinguished except for the manner in which they're dressed.

To sum everything I've said up to this point, characters and plot aren't the reasons to watch the film. Rather, it's the film's chase scenes that make The Road Warrior recommendable, and while they seem kind of sparse when considering the really long dead spots in the picture, there's no question that the action hits hard and fast when it comes. By far the best sequence is the climactic fourteen-minute desert chase, with nearly a dozen vehicles vying for the gasoline being transported by an eighteen-wheeler. Even Brian May's bombastic score, which sounds like Bernard Herrmann on steroids, works wonderfully. About the only thing that doesn't work in this scene is the use of sped-up footage, but that's a minor gripe compared to the sheer thrills of the spectacle. Without a doubt, it's easily one of the best and most elaborate chase scenes ever filmed.

Interestingly, 1981 proved to be a breakout year for action stars. Kurt Russell took leading man reins in Escape From New York and, more famously, Harrison Ford slung his way to superstardom in Raiders of the Lost Ark, a film which continues to overshadow The Road Warrior, if only because it was far more accessible to mainstream audiences. Well, that and the fact it's a much better movie. The Road Warrior was followed by a sequel, Mad Max Beyond Thunderdome, which, however blasphemous and atypical this might be, I actually liked more.

Review by Li-1 from the Internet Movie Database.