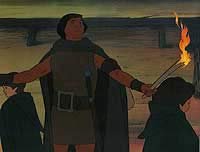 I remember watching this late at night on black and white TV, long before a live-action version was so much as a twinkle in Peter Jackson's eye... and being very impressed. Finally getting my hands this week on a VHS copy that was being thrown away (and isn't that just par for the course..?) I had the chance to revisit this film, and found that it still stands up quite well, although it's not quite the success that memory had painted.

I have to confess to a certain bias here. Some reviewers announce themselves as confirmed Jackson-lovers, others as Jackson-haters; I'm not exactly either. I was a devotee of the BBC Radio adaptation by Brian Sibley originally broadcast in 1981, and instantly recognised the voice of Gollum here -- Peter Woodthorpe would reprise this performance almost note-perfect for the radio three years later.

I must say, however, that where I found Jackson's films an increasingly indulgent disappointment, the Bakshi version, for all that it has been cut to the bone, is actually more accurate. Yes, there are the usual, understandable changes (here it is Legolas rather than Arwen who is substituted for Glorfindel as the Elf sent from Rivendell to meet the party) and there is a great deal of telescoping of the action. (The only exception to the latter, as others have remarked, is the oddly extended sequence at the ford of Rivendell, where the Ringwraiths, having demonstrated a chilling ability to freeze and draw back Frodo in mid-flight -- which they deploy again when he defies them after crossing the river -- then for some unexplained reason simply chase after him in a prolonged straight gallop, which is initially nightmarish but pointless, plot-wise, and definitely goes on too long.) I would also agree that the Balrog is unsatisfactory, due partly to bad animation, and that Gandalf windmills his arms too much.

But having watched both approaches to the film, I feel more than ever that the animated route is the one to take. In a tale that is half-myth (oddly enough, one thing that is included is a snippet of Aragorn's story of Beren and Luthien) the extreme literalism required by live-action filming, where everything from monsters to mail-shirts has to be created in detail to appear on camera, is counter-productive: latex-faced (or CGI) monsters are less monstrous than sketchily-drawn shapes, heroic costumes tend to look rather silly worn on real bodies, and hobbits or dwarfs with non-human body proportions are easy to animate but hard to film convincingly. Many reviewers have cited the sniffing Ringwraith in the woods, with its crippled, half-human movements, as one of the scariest moments in the film -- it certainly frightened me silly when I saw it for the first time alone in the dark!

The extreme stylisation of the introduction (plus a voice-over done with great skill and economy to sum up the back-story in a few sentences) works very well to depict an almost mythical era, and the change to the comic-book rusticism of the Shire -- I particularly like the Proudfeet -- corresponds effectively to the similar change in tone of Tolkien's prose. I did feel that there were some missed opportunities where the potential of animation could have been used to great effect: Gandalf threatening Bilbo with his true power in the opening scenes, Bilbo seeming to become a Gollum-like creature under the influence of Ring-lust at Rivendell, and Galadriel's famous temptation speech all were drawn more or less straight, where it would have been trivial to distort the scene to reflect the hobbits' changed perceptions. But generally speaking the changes in detail and palette -- firelight hues at Bree, bright colours re-emerging at Rivendell and in the Fangorn clearing, dirty greys and browns for Moria and the desolate lands -- work well to reflect the mood of the various episodes, where a live-action approach simply doesn't allow you to blur the background or sketch in a stylised setting.

As a fan I didn't care for either Jackson's or Bakshi's depiction of Lothlorien -- again, I feel that the radio soundscape was the best evocation I've come across of a beautiful, slightly uncanny woodland paradise caught out of time -- and I feel that Bakshi got the elven singing at this point pretty badly wrong, but I do like the little montage at this point showing the various members of the Company relaxing together after their travails in Moria. Aragorn giving a hobbit-fencing-lesson here is as charming (and equally uncanonical) a spectacle as Boromir engaging with the hobbits in Hollin in the Jackson version.

The depiction of Aragorn as convincingly weatherworn Ranger is good throughout this film (Viggo Mortensen's scruffy Jesus look really didn't work for me), although it would have been interesting to see how they planned to 'clean up' the character in the second half for Gondor's benefit. John Hurt, unsurprisingly, gives a sterling vocal performance, as does a resonant William Squire in the part of Gandalf. The hobbits are, I suspect, intended to reflect contemporary youth as audience-identification figures: I find the animated style (their proportions are much more 'cartoonish' than those of the human characters) works well to differentiate them, and the whole 'hairy feet' thing as drawn here comes across as much more plausible than in more literal depictions, including much fan art.

Personally I have less objection to Boromir as Viking -- he was always a fairly bludgeoning type -- than to beardy-Aragorn (illogical: they were both Numenorians, after all), although I am clearly in a minority here!

Review by Igenlode Wordsmith from the Internet Movie Database.