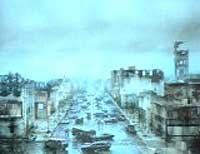 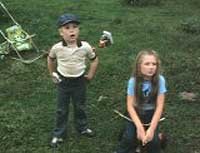 "The Day After" is a film of historical value. It shows a good slice of life in middle America during the Cold War. And, of course, its message about war and disaster in the nuclear age is clear. The visuals are excellent. The acting, cinematography, makeup, direction and all technical aspects of the film are very good.

It was just six years after this movie came out that the Berlin Wall came down at the start of the collapse of the Soviet Union. By 1983, when this film was made, the Soviets had greatly built up their military armament under Leonid Brezhnev. But even his reign at the head of the USSR (1964-1982) was after the worst scares and threats of nuclear war. The most dangerous time of the Cold War was from its start at the end of WWII – under Josef Stalin, through Nikita Kruschev in October, 1964. Kruschev sent Russian tanks to put down the Hungarian Revolution in November 1956. He was at the helm of the USSR during the Cuban Missile Crisis in October, 1962. And it was during his rule that the Berlin Wall went up, beginning on Aug. 13, 1961.

The placing of this movie in the U.S. heartland was significant. It was here that the U.S. had two major defense systems that it hoped would be the greatest deterrents to nuclear war. The first was the Strategic Air Command (SAC) headquartered at Offutt Air Force Base south of Omaha. As the movie noted, that was about 190 miles north of Kansas City. SAC was established in 1946 and was deactivated in 1992, after the fall of the Soviet Union. SAC had several bases around the U.S. with long-range bombers equipped to deliver nuclear bombs to the USSR.

And, from 1961 until its end, SAC operated an Airborne Command Post out of Offutt. For the next 30 years, an airborne command center would be aloft over the central U.S. at all times. The first aircraft fitted and used for such duty was the EC-135. By the 1970s, the Air Force acquired B-747s for this task. The airborne command rotated so that the active command aircraft would never be caught on the ground or in the air near any U.S. site that might be a target for Soviet missiles.

The second defense system was the installation of some 1,000 Minuteman missiles. These were housed in underground silos across several states – from Montana to Missouri. "The Day After" shows this aspect very well. The Minuteman Missile program began in 1961 and has had three upgrades of replacement missiles. Many of the original sites were abandoned and turned back to landowners after strategic arms reductions. But a decade into the 21st century, the remaining U.S. missile defense force included some 450 third generation Minuteman missiles.

Besides these aspects, this film is also of interest to me for personal experiences. After attending college one year, I worked on a survey crew in the summer of 1961 to lay the cable for missile silos in southeast Nebraska. These were Atlas missile sites to protect one of the SAC bases – at Lincoln. That base, since closed, then had 120 long-range bombers. Then, by early 1962, I was a paratrooper stationed in West Germany. The U.S. and NATO were replenishing their military forces that had been allowed to decline after WWII occupation ended in 1957. The rebuilding was triggered when East Germany began putting up the Berlin Wall in 1961. At the same time, the Soviets were increasing their forces along the Czech border. In this movie, that's where the Russians invaded West Germany through the Fulda Gap. In my first months in Germany, we took part in combined military maneuvers and war games along that border. Our units had border guard duty and we laid land mines. We also had the then-secret Davy Crockett tactical nuclear weapons. The movie script has an account of three nuclear devices exploding over Russian troops that had invaded West Germany.

It may be hard for people born in the last few decades to grasp the time and circumstances of the Cold War. But, besides our experiences growing up under the very real threat of nuclear war in the 1950s and 1960s, many of us have met people who lived under Soviet oppression. Should we not trust their words and take their warnings to heart about such tyrannies?

While serving in Germany, I met another paratrooper who was from Hungary. He had been a student in Budapest during the Hungarian Revolution in the fall of 1956. He had tossed Molotov cocktails at Russian tanks, and later escaped to the West where he joined the U.S. Army. He became a friend and later flew to the U.S. to take his citizenship test, and be sworn in as an American. Calmer, wiser leaders have been the rule among the world's military powers the past few decades. But now we have smaller countries with nuclear capabilities. Pray that reason will continue to outweigh radical ideology so that we never have a nuclear disaster like that in "The Day After.".

Review by SimonJack from the Internet Movie Database.