TV Spot - A Struggle Between Good And Evil
0:32 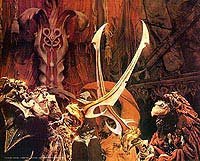 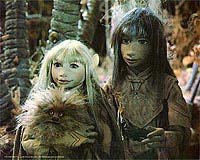 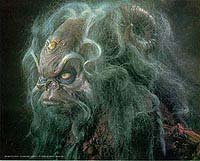 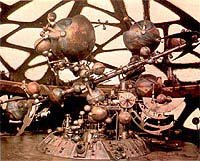 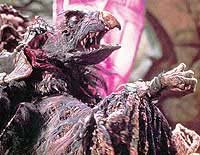 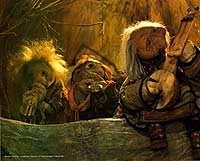 Truly, was was he thinking when he made this atrocity? The man had to be going then through a monster depression, or through very bad times, to give the world such a poisoned gift. Forget the Muppets, Labyrinth, Kermit the Frog et al. This is Henson at his worst; a man unleashing his worst obsessions; his cruelest, darkest, most sanguinary demons on the world. Just picture this: an innocent child is kidnapped and then tied to a chair, where a death ray sucks from him his "living essence" so a tyrant may drink it and regain his youth--all that offered to you in painstaking detail, in appropriate close-ups, so you won't lose any detail of the kid losing his soul, turning into a walking corpse, to be converted then in a slave. And that is not an extreme but the general tone of the movie. One that from the beginning pushes down your throat every somber theme Man knows and which evokes every sad emotion. You got here war, genocide, treason, slavery, rotting corpses, crab-like storm troopers.

This is the worst nightmare ever brought to the movies, besides which even Dark Water looks cheerful and I'm not exaggerating. I've gonna through the most extreme flicks without been much affected but this one truly took me down; so much so I had to see another movie right away to get it out of my system. So I did; and guess which the one that cheered me up was: The Relic. Imagine that. (And please, spare me all the pseudo-psychological, sociological, babble about the decoupling in good and bad of the original race; or about the symbols each species embody, or the hidden meanings--World Govt. for ex.--that for a movie to have any meaning, first it has to be watchable. But even if that was right, the plot is fatally flawed, as a decoupling should have had for effect a perennial struggle between good & bad, not supremacy by either side as seen here).

If you really love your children please don't let them anywhere near this monstrosity. TDC won't give you reprieve in its nightmarish mood. Henson won't allow you any moment of joy, humor or relief. The only occasion when he lets go somewhat (in the Irish-like pub) he promptly ends the joyful mood by making the Garthims storm the place and take everyone, adult and child, captive to be turned into zombies, as I said before. This isn't a flick worth your time. The characterization of both sides is virtually inexistent as we get no hint why the Mystics are good, why we should care for them, as all they do is sit around babbling about the long gone good times and muttering deep sentences about prophesies & star conjunctions. Neither we know why the Urskeks are bad, as we see them just as simple minded predators. To make things worse both specimens are so slow that they almost bring things to a halt every time they do something--not to mention walking, in the case of the Mystics, around which even an asthmatic snail could run rings-which of course ruins the pace. There is also a narrator somberly spurting out pretentious prose that doesn't give us any additional info anyway, except that we must care for the Mystics and hate the Urskeks.

BTW, there is a "happy end" but by them you are so overloaded with morbid images of cruelty, death, calamity, that you don't care anymore.

And oh boy, are these creatures ugly, as ugly as if Henson had filled the cast with rejects from each flick, TV program, he did before. The only ones cute here are Kira and Jen--especially Kira, at her most lovely when making her call to the animals--even if they look as simple wigged Topo-Gigios. But the rest of them, man! Kira got a pet which looks and acts like a dog but which isn't your typical pooch, as he presents a creepily disturbing human-like mug which eerily resembles that of a fat guy with a monster hangover. Then we got Aughra, who doesn't make her gender any proud as beauty is concerned; she looks like the rear side of a 100-year old pig; and when she frowns it looks as if the porker wants to...you got it. As for the bad Urskeks, they look like decomposed turkeys. I suspect that Henson bought once a dozen turkeys to fatten them, to throw a giant TG party, and that he left them in his backyard. Then he had to urgently leave for several months, forgetting the birds while they starved, decomposed and were chewed up by assorted animals. Then, when the came back home, he picked up the remains and said to himself: Well, here I got the villains for my next flick.

I've wondered why I've seen so many disturbed adults in the street, in the last few years, talking to lampposts and licking mailboxes--as Emily Gilmore put it well--and now I know why: they are those who as children were made to watch TDC by their parents, which turned their lives into a living nightmare and changed them for the worst. Parents: don't allow that happening to yours.

In all, if you feel like watching a Henson, do Labyrinth for a 100th time if you will, but never ever come close to this one.

Review by felixoteiza from the Internet Movie Database.