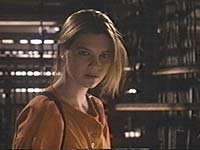 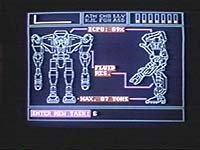 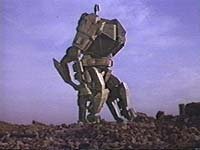 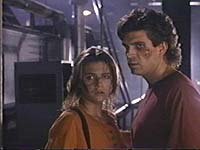 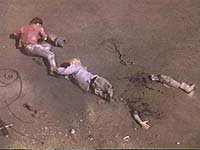 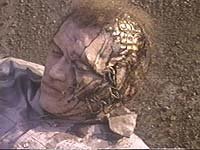 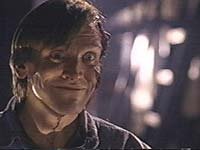 The year is 2030, a remote TV station has been infiltrated by a Synthoid, a Terminator-like robot who is programmed to kill those who oppose the tyrannical Unicom organization.

With B film execution Crash and Burn steals some concept elements from Class of 1999, The Terminator, Robocop, Blade Runner and The Thing to name a few. Although it's slow-paced there's room for a gratuitous shower, electrocution scene, shogun action and stop motion animation, anyone familiar with the studio offerings will appreciate the pace and tone. Oddly dubiously marketed as Robot Jox 2 or from the makers of Arena (don't expect the fights of Arena or Jox) as it contains less than a minute of giant Robot action.

Director Charles Band (this generations Roger Corman) gives a tight little flick that benefits from being filmed on location giving it an almost cinematic feel. The shadowy setting gives it some atmosphere with a dusty desert setting bookending the film and the Synthoid is menacing at times - realised by some surprisingly good practical special make-up effects. Despite borrowing music cues from Richard Band's other Fullmoon film scores the music is effective enough.

Lead Paul Ganus as Keen wields a shotgun well enough but he looks like he's just walked off a Danielle Steele TV adaptation. Co-star Megan Ward as Arren gives a solid performance considering the sparse script. Supporting cast include Jack McGee and veteran actor Ralph Waite, Eva La Rue gives physical performances (and like Ward went on to do bigger things). There's also some genuinely humours lines from Bill Moseley as Quinn who ensures the title of the film is uttered in J.S. Cardone's dialogue.

Even though Crash and Burn doesn't pretend to be more than it is the casual viewer may be disappointed. All things considered, even with the future looking suspiciously like the 1980s, right down to the computer hardware, braces and hairdos it's one of Fullmoons better outings.

Review by amesmonde from the Internet Movie Database.