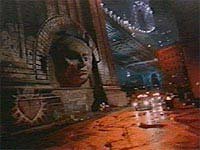 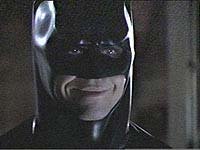 Quite like one of its villains - The Riddler - Batman Forever is a mystery wrapped in an enigma, because it tries to balance thoughtful storytelling and some interesting character moments with some downright ridiculous characters and set-pieces, which just leaves it feeling lacklustre and generally poor.

Batman Forever follows Bruce Wayne (now played by Val Kilmer) as he faces off with Edward NigmaThe Riddler (Jim Carrey), a former employee of Wayne's who wants to control the world using television, and Two-Face (Tommy Lee Jones), who wants to bring Gotham to its knees, and Batman along with it. However, this time the Caped Crusader receives help from Dick Grayson (Chris O'Donnell), a young man not unlike Bruce, who together must save Gotham once more.

The main problem I had with the plot of Batman Forever is that it has no direction and was clearly made by merging the ideas of two different parties. There is a darker subplot of Bruce delving into his past to recount his parents' death, which fits perfectly into the established universe here and really works, but then there are zany action scenes and ridiculous set-pieces that shatter any of the realism or depth that the film was trying to create. The film, for the most-part, takes time to set up characters and their relationships with others, mainly with Dick Grayson and the Riddler, who have decent chunks of time dedicated to developing their characters. Although I didn't like the Riddler (I'll get on to that later), I appreciate the efforts made to flesh out his character.

Like its plot, the characters of Batman Forever are a mixed bag. Val Kilmer is, in my opinion, pretty great as Batman, and he delivers a mostly dark and brooding performance as the Bat and his alter-ego, which I was definitely impressed with. Unfortunately, the villains are the main problem. Tommy Lee Jones' Two-Face is simply horrendous: hammily acted with poor dialogue and costumes, with little to no background to flesh out his character and very unclear motives. Jim Carrey's Riddler is another confusing one, since his character is developed fully and he has plenty of screen-time, but I just hated his performance. The Riddler in the comics is not zany and doesn't bounce off the walls and chew the scenery, and is intellectually equal to Batman, trying to outsmart him, which is touched upon but never fully realised here. I was also left with a bitter taste from Nicole Kidman's Chase Meridian, since she has some superb character moments and good chemistry with Kilmer's Bruce Wayne, but towards the first half comes across simply besotted with Batman without her own interests, which I found corny and cringe-worthy.

The best parts of Burton's Batman films were the designs: be it the Batsuit, Gotham City or the Batmobile, everything was stylish and fit in perfectly with the tone of the film. The same can't be said for Batman Forever, where the Batmobile has been simply ruined thanks to neon wheels and tacky gadgets, and the Batman himself has been vandalised due to those dreaded Bat-nipples. Oh God. Gotham City is now plagued with neon lights and ridiculous gangs that would never intimidate anyone in the real world, and it all ends up making the film even less believable than it already was, a true shame considering the quality of Burton's designs.

Director Joel Schumacher's cinematography is mediocre and at times downright embarrassing. There were far less of the spectacular establishing shots of Gotham than in Forever's predecessors, and the few shots that did stand out were for all the wrong reasons. Why, on God's Earth, would you take Batman, a dark, brooding hero who strikes fear into the hearts of his enemies, and give him nipples on his costume, and moreover, have entire shots focused on his crotch or rear? It baffles me that these decisions were given the green light, and it unfortunately goes to show that in contemporary cinema, the amount of money made is valued more than decent storytelling or sticking to the source material. The film's CGI, when rarely implemented, is also abysmal, and if I had to compare it to any other film it would be Alien 3. In both cases, the CGI looks unfathomably bad and is incredibly jarring, and I would argue that the CGI from Batman Returns, released 3 years before this, is far superior.

Not everything about Batman Forever is terrible thanks to the few character-driven moments that give fans of Burton's films something to look out for. I love the fact that it delved much deeper into Bruce Wayne's past, which gave him a layer of depth that hadn't been explicitly explored before, and character moments, such as between Bruce and Chase and then Bruce and Dick, are fantastic when executed correctly: if this film had focused on its plot more than its action, it potentially could've been superb. There are also a couple of easter eggs to look out for if you're a fan of the comics; my particular favourites being the Metropolis reference, the 'Excelsior' casino, the array of previous Batsuits and the suggestion of 'Nightwing' as Dick's superhero name.

Batman Forever isn't a train-wreck per se, but falls down due to its lack of focus and muddled storytelling and tone. It doesn't know whether it wants to appeal to those who like Burton's grittier, story-driven films, or those who want to see Jim Carrey chewing the scenery and nipples on the Batsuit, eventually ending up satisfying nobody.

Review by lukeh38
from the Internet Movie Database.