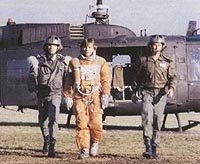 The year is 1997, and World Peace seems to have come, with most classic weapons of mass destruction having been abandoned. However, orbiting the Earth there is the EuropeanAmerican space station FLORIDA ARKLAB, capable of controlling the weather at any location on the planet underneath. A civil project by nature, it might be abused as an offensive weapon, since it could deliver devastation to any potential adversary simply by creating natural disasters such as storms and floods. No wonder the space station soon becomes the central point in rising political tensions between East and West, next stop World War 3 (as indicated by the German tagline (transl.) "The end of our future has already begun"). We're following the main protagonist Billy Hayes, an astronaut aboard the station, as he wades through a plot of secrecy and sabotage trying to tell friend from foe in the process.

This film is the first "real" movie by Roland Emmerich, and knowing his later works, it is, simply speaking, surprisingly good. First off, it was and is a visual treat by any standard, with well-crafted models and a set-design that made a point in trying to look as realistic as possible. At that, it is visually reminiscent of many other movies from that era (Star Wars or Moonraker, to name some), but doesn't fail nearly as badly as some of them do; it simply looks good. And what's more, this movie has a story that makes some sense and won't let you leave your seat until it is resolved. The acting is good, the characters are well drawn and partly are in for some surprise. The general mood is by no means optimistic, this is definitely a Cold War scenario, which nowadays of course has the tendency to make you chuckle, considering that 1997 looked totally different than portrayed in the movie.

Bottom line: if you know later Emmerich blockbusters such as ID4 and Godzilla, you definitely notice his handwriting in this one, and seeing the path he took from here on makes sense. But much unlike said later works, this movie excells not only in the audio and CGI department, but also has something like characters and storyline. People liked ID4 as a cineastic lollipop, but as a film, this one is far better than most.

Review by pope-1 from the Internet Movie Database.