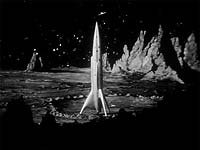 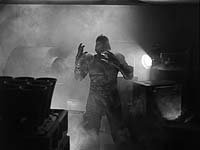 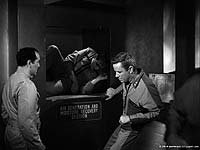 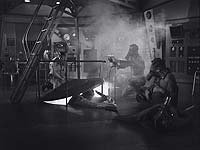 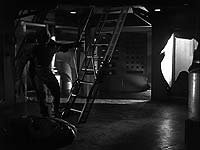 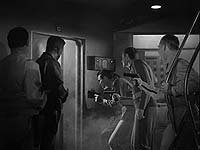 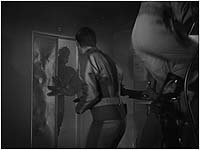 Love these old movie titles that are sooo long, 'The Terror that Emerged from Darkest Space and Glooped its way Across the West...in Technicolor!'. This movie does appear to be the inspiration for that classic Alien movie called...errmm...'Alien'.

Indeed the plot is very familiar, but for the time I think it was a nice change of pace. Its easy to assume that this plot would go down the usual route of an alien lifeform loose inside a ship killing everyone, or the same thing, but on another planets surface. Interestingly its all about a rescue crew that pick up one last survivor of a previous mission to Mars. All of the crew from that previous mission are dead accept one man, Col. Carruthers, he is suspected of murdering the crew so he could survive longer with the food rations. The Col claims an alien creature killed everyone but is unable to prove it, low and behold said creature finds its way on- board their ship just before it blasts off back to Earth. Let the killing begin!

What follows is a very lowkey and much more down to earth horror thriller than most of this genre (and era). There are no pretty boys here, its all unfit looking middle aged men with receding hairlines, clearly some are more blue collar than the others (with local accents and names like Gino), and a couple women...again not exactly centre-page types either. Its very much the working man in space, with a few, more intelligent types, for good measure. The ship is amusingly basic in design, much like something from a Bugs Bunny Looney Tunes cartoon actually, and doesn't really contain anything fancy, no big laser weapons or teleports etc...All the sets are very simple, obviously based on real technology of the time to a degree, and add to the plot by giving the crew real problems to solve (instead of just whipping out some hi-tech futuristic gizmo to save the day).

You can clearly see the similarities between this movie and that Ridley Scott flick. The way this movie has been shot, the camera angles, the shadow work, hiding the beast for as long as possible, the air ducts, the crew eating together, they smoke, using an airlock to kill the creature, utilising spacesuits, finding the beast impossible to kill etc...The more you watch, the more you see Dan O'Bannon kinda ripped this movie off. The main difference here being the crew are stocked to the gills with all sorts of weapons.

The weapons actually let this movie down really, first off why would futuristic space age man have revolvers, rocket launchers and grenades on their Mars bound spaceship? Secondly they actually set a trap within the ship using the hand grenades, lots of them! Now call me cautious, but wouldn't that be kinda dangerous to the ships interior? and a slightly wild and uncontrolled way to set a trap, in a confined space. Talk about collateral damage! Next I find it amusing how nothing kills this thing, nothing! Its bullet proof, gas proof, rocket launcher proof (yes they fire rocket launchers inside their control room), radiation proof, fire proof etc...Eventually they kill it with suffocation, although I'm amazed it wasn't oxygen proof too.

The creature is simply a man in a rubber suit I'm afraid, a very obvious crinkled rubber suit. Now on the plus side the creature mask is quite convincing, quite scary for the time I'll bet, its a nice design. The frame of the beast is also good, the actor inside was obviously quite tall, he's padded out, the hands and feet are big, and the claws are a solid touch, in silhouette the alien is pretty fearsome. A lot of the design work is down to the oversized hands actually, along with the aliens slightly pointed shaped head, the three fingeredclawed hands look great in shadowsilhouette, hence the clear imagery on the movies poster. Unfortunately the bloke inside the suit didn't work too hard on his alien-esque movements, he runs and walks around like some set worker, its quite amusing actually, you half expect him to whip out a ciggie at any moment.

The acting is pretty good throughout, there are good moments tension with some eerie shots, and in general the effects are effective. Of course there will be some unintentionally funny moments to the modern day viewer, especially with the space walking outside the ship, effects. Its hilarious how a simple bulb pings on and off to alert the crew in an airlock when its safe to leave, especially when you can see the door is a regular door and you can see the slight crack around the door! Its also amusing how the rescue crew allow Carruthers (the suspected guilty crew member) to wonder around with complete freedom, he can even play chess with them and is allowed to search for other missing crew members. Why isn't this guy locked up?

Definitely a fun B-movie with some lovely hokey space effects for us fanboys. Even though the man in the rubber alien suit is pretty funny in the way he moves, it also spoils the movies tension really. Still, its another classic in every aspect with the alien design becoming a well know image in the sci-fi horror archives. For once the movies poster does do the film justice too, its actually an accurate portrayal of what happens in the movie.