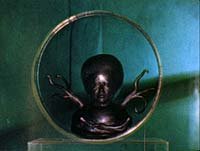 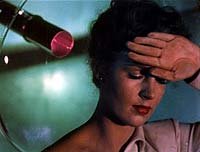 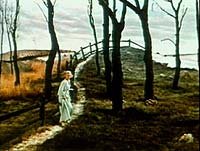 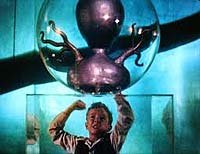 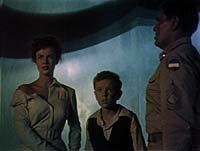 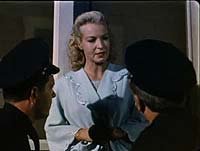 Early one morning young David MacLean is woken from his sleep by a noise outside. Looking out of his bedroom he sees a spaceship land in a field. Telling his parents his story is quickly dismissed as a nightmare. Very quickly however people who enter the field of the landing return with their personalities changed and it's clear that an alien invasion is under way

Sometimes you watch a film that has you saying to yourself this is absolute rubbish and yet you find yourself enjoying it for some reason. INVADERS FROM MARS is a few steps up from being mere rubbish and yet you're very aware that nothing about it is very good. The budget is small and this translates to the mis en scene, the mutants are very silly and are actors in green jumpsuits etc and the film doesn't succeed in doing anything perfectly and yet it's probably the perfect science fiction B movie from the 1950s. Why should this be?

Director William Cameron Menzies directed HG Wells 1936 film THINGS TO COME, a film that showed great visual imagination even though Menzies had a problem realising it on screen, possibly down to over ambition. We see the same type of ambition and even though it never actually works one hundred per cent there is a strong imagination at play that makes for a highly stylized movie. " The sand choir " sound where the ground opens up is slightly laughable at first but the more it is used the more it starts to drill itself in to the audiences mind Menzies started out as production designer and he concentrates on the sets. It's interesting that the story is told through the eyes of a child and conscious of this Menzies builds his sets as to how they look to a child. Notice the way David enters the police station to talk to the police sergeant and walks through a massively long and wide corridor which is both minimalist and implausibly large which suits the world view of a child

It's also the first film to use the cold war allegory. Yeah I know there's a subtext to THE THING FROM ANOTHER WORLD with the warning " watch the skies " but this is the first movie to state watch everyone around you because there's communist traitors in our midst. We're shown the American military leader stating that tanks are a great site in any other war but if you're fighting a cold war where the enemy are using invisible infiltration tactics then they're no good. The film is also good at showing the childhood angst that the world is full of adults and it does seem strange that once adults become communist slaves from the red planet they somehow become more oppressive adults? Hmmm a somewhat reactionary view is it not?. Of course scientists are the good guys and this is in keeping with 1950s Western world science fiction

In summary INVADERS FROM MARS is on the surface a rather cheap and disposable film featuring a child protagonist but is not easily dismissed as being a children's film come B movie. Either by accident or design - and I'm probably being charitable by saying it's by design - - it is ironically one of the better movies from its era and even today remains a minor classic.