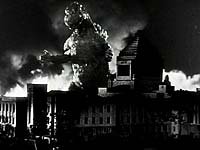 It's hard to believe it's now been more than six decades since Godzilla was first unleashed upon the world. First released in 1954, Godzilla became the film that both launched a genre and became the benchmark by which it would be judged by. It's a film that, even after all the years that have passed since, continues to resonate with a sense of being a rare film that is at once of its time and yet is timeless as well.

The film is best remembered for introducing Godzilla to cinema screens. In an interesting move, the film spends quite a bit of time before revealing the titular beast, a move that pre-echoes what Spielberg would do with Jaws two decades later. It's something that, even with the iconic nature of Godzilla, is still immensely effective today in building both tension and audience expectations. The first appearance comes as a genuine surprise after quite a bit of build-up and subsequent appearances are quite sparse when one realizes that the film runs less than 100 minutes. It's an interesting way of treating the soon to be iconic monster to be sure.

The film is also remembered for its, at the time, impressive special effects. Watching the film today, the special effects have of course dated. Godzilla is clearly a man in a suit and the miniature effects are unlikely to convince anyone though are impressive pieces of work for their time. The effects though do what they set out to do: they present a series of images for the viewer's imagination to latch onto. The images, the effect of the effects as it were, create a series of indelible images which have become iconic. More importantly they serve the story which makes it possible to overlook some of their deficiencies.

Because, as important and iconic as though effects are, they aren't what really matters. Godzilla, though it shares its name with the rampaging monster, is a film about science run amok and its consequences. The film shows us the aftermath of each of Godzilla's appearances from families worried about missing crew members of lost ships to a devastated Tokyo and of course the final scene. It's a film that is of its time in a way, coming in the aftermath of massive American conventional bombing as well as the dropping of two atomic bombs at the end of the Second World War, as the filmmakers use so much of its iconography and the fear of early Cold War nuclear testing to create their world. The results give the film a sense of time, place, and indeed emotional power that so many other films of the genre it spawned would lack.

It's also something that, for all the looking down that is done on Godzilla and the films it spawned, helps make it a surprisingly intelligent film. The writing and plotting of Godzilla is comparable to Nigel Kneale's Quatermass serials being made by the BBC on the other side of the world during the same decade. While I sincerely doubt any obvious connection between the two, they're both quite similar in terms of taking real world fears and exploring them in a science fiction context. The basic idea of Godzilla, that is of an ancient force coming back to wreck terror on the modern world in part thanks to our technological development, is very much in keeping with Kneale's writing. That there's a scientist trying to understand the threat while butting heads with the establishment also reminds one of Kneale's Quatermass serials as well. While these are perhaps elements present in so much of 1950s science fiction worldwide, rarely are they as thoughtfully examined or portrayed as this film presented it.

Yet for all of its sense of being of its time, it's all a timeless piece. The central premise of the past coming back to haunt us never gets old and the potential dangers of nuclear energy has continued to be highlighted over the years from nuclear accidents (including the meltdown at Chernobyl and more recently at Fukushima in Japan) along with the proliferation of nuclear weapons. The debate over how to deal with Godzilla, whether the use of one terrible weapon to stop a threat is justified, speaks not just to the arms race of the Cold War but to modern concerns about the nature of drone warfare and mass surveillance with the question of 'do the ends justify the means?'.

All of this has helped to make the original 1954 Godzilla film as watchable today as it was then. It's combination of tense pacing, effects, and thoughtful storytelling make it a film that continues to be unique despite numerous sequels and remakes. It's a thoughtful, well made piece of science fiction and one that I suspect will continue to be watched for decades to come.

Nov 2 2017, 13:53
Godzilla delivers a powerful impact over sixty years after its original release.