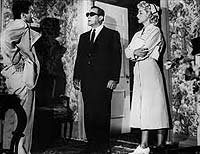 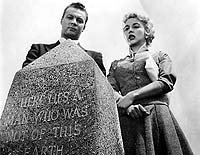 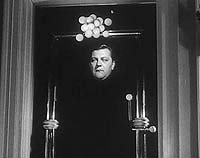 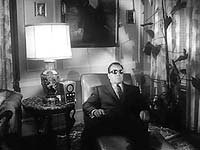 The ultra-creative Roger Corman directed quite a few horror and sci-fi movies in the late 1950s and early 1960s. They almost all had low budgets, short running times, lots of action and plots that moved like lightning. Some were duds (just see "Viking Women and the Sea Serpent") but many were pretty good. "Not of This Earth" is one of the best Corman films from this period, with a great cast, good script and fine direction.

A white-eyed alien named Paul Johnson (Paul Birch) comes to earth in order to collect human blood for his home planet Davanna, which is experiencing a horrible war. Johnson's eyes emit some kind of lethal powers when he takes off his sunglasses. He is hires nurse Nadine Storey (Beverly Garland), who administers blood transfusions and a personal assistant Jeremy (Jonathan Haze). He communicates with his leader and sends blood home via a matter transmitter. He is defeated at the end by Storey's boyfriend, a policeman who discovers that the alien cannot tolerate loud noises (such as police sirens). Along the way, there's an interesting subplot about the arrival of a female alien (Anna Lee Carroll) from Davanna, and some unusual blood research by a local doctor (William Roerick).

Birch is just excellent in the title role, playing a menacing, sunglasses-wearing alien with great flair and restraint. Garland, as the threatened heroine, is good as usual and her role gives her plenty of opportunities to scream. The best performance is provided by Dick Miller, who hilariously plays an over-aggressive vacuum cleaner salesman who unwisely conducts a demonstration in the alien's basement. The demonstration is followed by footage of the salesman's blood being drained and his body being stuffed into an incinerator. (This was a clever touch by Corman-'how many times have we all been annoyed by door-to-door solicitors? I'm not endorsing incinerating anyone, but the scene was amusing.)

Corman's direction and the fine cast set "Not of This Earth" apart from lots of other sci-fi B-movies of the late 1950s. If you like these kinds of films, it's really fun to watch and it moves at warp speed.

Review by mrb1980 from the Internet Movie Database.