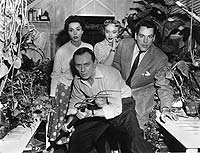 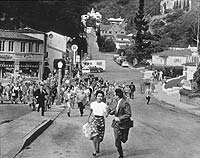 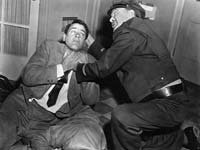 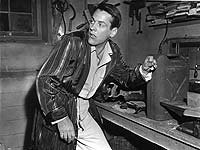 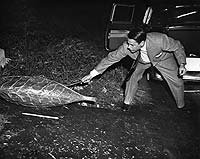 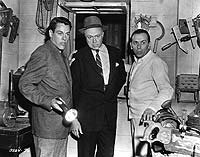 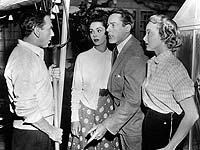 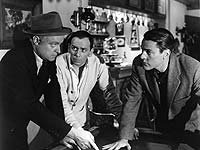 Just like so many of the sci-fi horror films that were so popular in the 1950s, this movie is about an alien invasion but that's where the similarity ends. This movie doesn't feature monsters, violent deaths or scenes of widespread destruction but instead focuses on a far more insidious threat that seems impossible to stop and robs people of their humanity. This quiet invasion deprives its victims of their individuality, their emotions and even their objectivity because, after being transformed, the people concerned are conditioned to believe that a life without love, desire, ambition and faith is not only simpler but also preferable to the way in which they'd lived previously. The full horror of what takes place is conveyed through the experience of a small town doctor who, as a result of all that he sees and learns, goes from being perfectly calm and rational to being hysterical, terrified and completely out of control.

t's in this highly agitated state that Dr Miles Bennell (Kevin McCarthy) is admitted to a hospital emergency room where he's invited by a psychiatrist to describe the events that led to his current meltdown. Bennell explains that, following a request from his nurse, he'd returned to his Santa Mira practice from a medical convention to deal with a sudden high demand for his services but, on his return, the numerous patients who'd wanted to see him urgently, had changed their mindst soon became evident however, that something unusual was going on in the town because first a little boy who insisted his mother wasn't his mother was brought in to see him and then, he visited his ex-girlfriend's cousin who'd reported that her uncle wasn't her uncle. As there didn't seem to be any rational explanation for the apparent delusions that these people were suffering, Bennell had spoken to local psychiatrist Dr Kauffman (Larry Gates) who thought that, what was happening was probably an epidemic of mass hysteria.

Bennell started to rekindle his romance with Becky Driscoll (Dana Wynter) who, like him, had recently been divorced. When the couple were out on a date one night, he'd received a telephone request to visit his friend Jack Belicec (King Donovan) who'd found, what looked like, a human body on his pool table. Disturbingly, it resembled Jack but didn't have any fingerprints or all of his facial features. Later, Bennell also found a similar incomplete duplicate of Becky in the basement of her house but when he called in Dr Kaufmann to see the "bodies", they'd disappeared and so Kaufmann simply assumed that Bennell was as deluded as some of his patients.

When Bennell, Becky, Jack and his wife Teddy (Carolyn Jones) were together one night at Bennell's greenhouse and saw replicas of themselves emerging from huge seed pods, it became clear to Bennell that the townsfolk were being replaced by duplicates and that the changeover was taking place when they were sleeping. Bennell tried to contact the FBI for assistance but failed because the telephone operator repeatedly told him that the lines were busy and soon, after seeing further evidence that confirmed his theory and realising that he and Becky were the only citizens left in the town who hadn't been replaced, decided that they had to go on the run. The events that followed had then led to his breakdown.

Screenwriter Daniel Mainwaring's brilliant adaptation of Jack Finney's original story called "The Body Snatchers", features dialogue that's both economical and effective and this together with Don Seigel's superb direction clearly played a major part in the success of this movie which now enjoys classic status. Seigel injects great energy, drive and pace into the action and also does a great job of building the looming sense of paranoia which becomes ever more prevalent as Bennell's predicament makes him increasingly isolated and desperate. The scene in which Bennell and Becky hide in a trench and watch their pursuers run over the planks that cover them is quite inspired and perfectly executed.

The fears expressed on this movie (e.g. loss of identity, individuality and humanity) reflected the anxieties of many people in the Cold War 1950s and explains why some commentators suggested that Bennell's story had an anti-communist, anti-McCarthyite subtext which Mainwaring and Kevin McCarthy claimed was never intended.

The quality of the acting in "Invasion of the Body Snatchers" is consistently good with Kevin McCarthy's performance standing out because of the range of emotions that he expresses so convincingly and the terror that he conveys so powerfully, especially in some of his close-ups. His performance was also vital to the movie's success because the whole story revolves around his character's experience.

Review by seymourblack-1 from the Internet Movie Database.

Feb 4 2017, 16:25
One of the most chilling, spellbinding science fiction movies ever made.